Ever since the Citizenship Amendment Bill was passed by both houses, several violent protests were held by rioters across the country.

In breaking news, 6 Muslim protesters have paid their first installment of 86 thousands to the Kanpur administration. These rioters damaged public and private property in the name of anti-CAA protests.

After the violent protests against the new citizenship law, the Uttar Pradesh chief minister Yogi Adityanath said that strict action would be taken against those who indulge in violence in the state and their properties would be seized.

He further said that his government would not tolerate the violence at any cost and concrete action would be taken against those who were involved in demonstration and stone-pelting during the protest.

Later, the Uttar Pradesh government began the process of sealing the properties of protesters who were involved in rioting in the name of anti-CAA protest across the state.

Thereafter, several protesters in Lucknow and Kanpur were identified and notices were sent to them by the administration. As many as 130 rioters have been asked to pay the charges along with fine amounting to about 50 lakhs.

The nation has suffered a huge loss after protesters vandalized public and private property under the guise of CAA. According to the Dainik Jagran report, vandalized railway tracks and set fire to the trains in protest have resulted in over Rs 100 crore loss for Indian Railway.

Protesters have no choice but to pay penalty or else their properties will be seized. The Uttar Pradesh government had also put up hoardings of rioters with images and details on the streets in Kanpur, who were caught in pictures and videos while setting fire to vehicles or damaging property. Their guilt is making them realize their mistake. Now, they regret damaging public property. 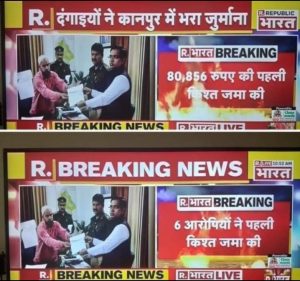 After the citizenship bill was passed by the parliament, many violent protests have been held in many parts of the country damaging government properties and leaving many people injured. Protest against any bill is good only if it is done in a peaceful manner but when protest becomes violent then it starts taking the lives of common people.

We must not forget the way certain people of the country have created violence while protesting against the CAA, with burning vehicles, buildings, destroying public properties and desecrating temples which resulted in huge loss of the government.