Yesterday, the Uttar Pradesh government had exposed the fake claims of Priyanka Gandhi, whose list of ‘1,000 buses’ to the state government turned out to be a fake list of dozens of blacklisted autorickshaws, and two-wheelers instead of real buses.

Perhaps unable to cope with the massive political embarrassment, Haryana Congress leader Pankaj Punia took to Twitter to vent out his anger against UP CM Yogi Adityanath and his government. 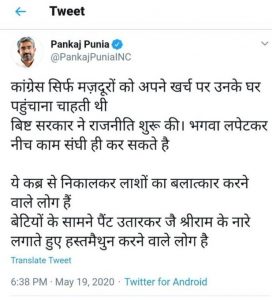 Taking to Twitter, the Haryana Congress leader wrote,”Congress just wanted to help migrant workers reach home, and was willing to spend money for it, but the ‘Bisht’ government started politicising the matter. Only Sanghis wearing Bhagwa (saffron) can do such leech (lowly, disgraceful) activities.

The blatantly anti-hindu, and hateful tweet of Punia soon created a controversy. Thousands of social media users condemned the usage of such filthy language and pointed out the plunging standards of Congress’ politics.

Punia, however, was quite confident of his tweet. He went on a twitter spree of liking and retweeting the tweets of Congress supporters. He had even shared tweets where his supporters had shared that he has stated nothing wrong and the allegations are absolutely correct. 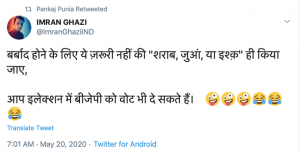 Punia has since deleted his tweet and has just tweeted that he did not want to hurt sentiments, and his allegations was regarding the ‘incident’ in Gargi College.

However, Punia has not explained why he had added ‘Bisht government’ if his attempt was to highlight the so-called incident in Gargi College. It is notable here that Congress leaders use the surname ‘Bisht’ as an insult towards UP CM Yogi Adityanath, because his birth name before he took up Sanyas, was Ajay Singh Bisht.

Congress leaders, ironically, get very upset when someone uses the Maino surname for their president Sonia Gandhi, whose original Italian name is Antonia Maino.

The reality of Gargi College ‘incident’

Punia’s fake claims pertain to a so-called incident in Delhi’s Gargi College earlier this year, where many leftist handles and communist groups had run propaganda that many ‘saffron-flag holding BJP supporters’ had arrived at an event at Gargi College and had molested girl students while chanting Jai Shri Ram slogans.

While the college had admitted to security lapse, Delhi Police had confirmed that all ‘outsiders’ were either students of other colleges or friends invited by Gargi College students.

Yesterday, UP govt confirmed that Congress has submitted a list of 1049 buses, but surprisingly, the list includes auto-rickshaws, trucks, ambulances etc, while details of many vehicles were not available. Priyanka Gandhi also conceded that there are only 879 buses in the list of 1049, and added that a new list of 200 buses will be furnished on Wednesday.