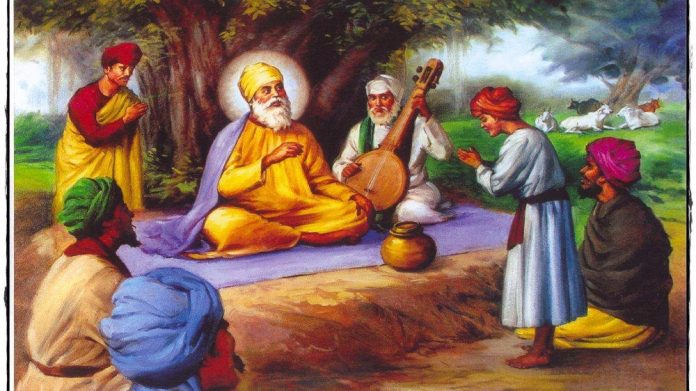 The era of the 10 gurus of Sikhism, a monotheistic religion that stresses doing good throughout life, spans nearly 250 years, from the birth of Nanak Dev in 1469, through the life of Guru Gobind Singh. At the time of his death in 1708, Guru Gobind Singh bequeathed his title of guru to the Sikh scripture, Guru Granth.

Sikhs regard the 10 gurus of Sikhism as the embodiment of one guiding light that passed from each guru to his successor. That guiding light now resides with the scripture Siri Guru Granth Sahib. There are about 20 million Sikhs in the world, and nearly all live in the Punjab province of India, where the religion was founded.01of 11

Guru Nanak Dev, first of the 10 gurus, founded the Sikh faith and introduced the concept of one God. He was the son of Kalyan Das ji (Mehta Kalu ji) and Mata Tripta ji, and the brother of Bibi Nanaki. He was married to Sulakhani ji and had two sons, Siri Chand and Lakhmi Das.

Guru Angad Dev compiled the writings of Nanak Dev and introduced the Gurmukhi script. He was the son of Pheru Mall ji and Mata Daya Kaur (Sabhrai) ji. He was married to Mata Khivi ji and had two sons, Dasu and Datu, and two daughters, Amro and Anokhi.

Guru Amar Das, third of the 10 gurus, disavowed caste with the institution of langar, pangat, and sangat.

He was born in Basarke, India, on May 5, 1479, to Tej Bhan ji and Mata Lakhmi ji. He married Mansa Devi and had two sons, Mohan and Mohri, and two daughters, Dani and Bhani.

Guru Raam Das began the excavation of the Sarovar in Amritsar, India.

He was born in Goindwal, India, on April 14. 1563, to Guru Raam das and Ji Mata Bhani ji. He wed Raam Devi, who was issueless, and Ganga ji, and they had one son, Har Govind.

Guru Har Govind (Hargobind) built the Akal Takhat. He raised an army and wore ​two swords that symbolized secular and spiritual authority. The Mughal Emperor Jahangir imprisoned the guru, who negotiated a release for whoever could hold on to his robe.

The sixth guru was born in Guru ki Wadali, India, on June 19, 1595, and was the son of Guru Arjun and Mata Ganga. He married Damodri ji, Nankee ji, and Maha Devi ji. He was the father of five sons, Gur Ditta, Ani Rai, Suraj Mal, Atal Rai, Teg Mall (Teg Bahadur), and one daughter, Bibi Veero.

Guru Har Rai, seventh of the 10 gurus, propagated the Sikh faith, maintained a cavalry of 20,000 as his personal guard, and established both a hospital and zoo.

He was born in Kiratupur, India, on Jan. 16, 1630, and was the son of Baba Gurditta ji and Mata Nihal Kaur. He married Sulakhni ji and was the father of two sons, Ram Rai and Har Krishan, and one daughter, Sarup Kaur.

Guru Har Krishan became guru at the age of 5. He was born in Kiratpur, India, on July 7, 1656, and was the son of Guru Har Rai and Mata Kishan (aka Sulakhni).

Guru Teg Bahadar, ninth of the 10 gurus, was reluctant to leave meditation and come forward as guru. He ultimately sacrificed his life to protect Hindu Pandits from forced conversion to Islam.

He was born in Amritsar, India, on April 1, 1621, the son of Guru Har Govind and Mata Nankee ji. He married Gujri ji, and they had one son, Gobind Singh.

Gobind Singh, the 10th guru, created the order of Khalsa. He sacrificed his father, mother, sons, and his own life to protect Sikhs from forced conversion to Islam. He completed the Granth, bestowing upon it the title of everlasting guru.

He was born in Bihar, India, on Dec. 22, 1666, and was the son of Guru Teg Bahadar and Mata Gujri ji. He married Jito ji (Ajit Kaur), Sundri, and Mata Sahib Kaur and had four sons,  Ajit Singh, Jujhar Singh, Zorawar Singh and Fateh Singh.

Siri Guru Granth Sahib, Sikhism’s holy scripture, is the last and everlasting Guru of the Sikhs. He was inaugurated as guru at Nanded, India, on Oct. 7, 1708.