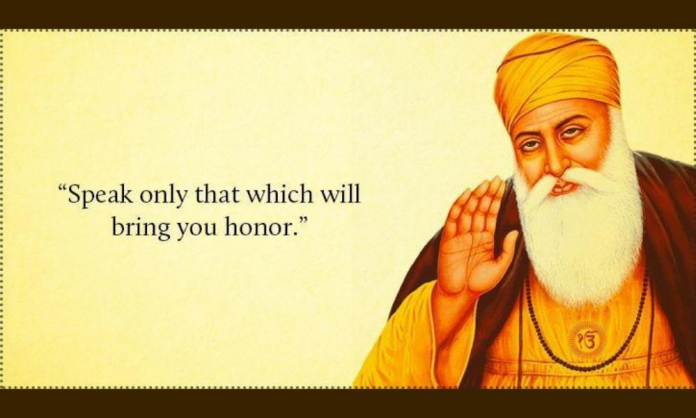 Before going into this, brace yourself. You going to read the story of the first Sikh Guru. This is the story of Guru Nanak Dev Ji.

Guru Nanak Ji was born on was April 15, 1469 at Kartarpur (present day Pakistan). His father’s name was Mehta Kalu. Guru Nanak Dev Ji was the founder of Sikhism, one of the youngest religions. Guru Nanak became the first Sikh Guru in history and his spiritual teachings laid the foundation on which Sikhism was formed. Considered a religious innovator, Guru Nanak travelled across South Asia and Middle East to spread his teachings. He advocated the existence of one God and taught his followers that every human being can reach out to God through meditation and other pious practices. Interestingly, Guru Nanak did not support monasticism and asked his followers to lead the life of honest householder. His teachings were immortalized in the form of 974 hymns, which came to be known as ‘Guru Granth Sahib,’ the holy text of Sikhism. With more than 20 million followers, Sikhism is one of the important religions in India. 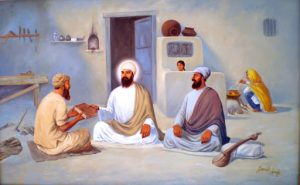 Nanak was born into a middle-class Hindu family and raised by his parents, Mehta Kalu and Mata Tripta. He spent most of his childhood with his older sister, Bebe Nanaki, as he was fond of her. As a child, Nanak went on to astound many with his intelligence and his interest towards divine subjects. For his ‘upanayana’ ritual, he was asked to wear the sacred thread, but Nanak simply refused to wear the thread. When the priest insisted him, a young Nanak took everyone by surprise by asking for a thread that is sacred in every sense of the word. He wanted the thread to be made of mercy and contentment, and wanted continence and truth to hold the three sacred threads together.

In 1475, Nanak’s sister got married to Jai Ram and moved to Sultanpur. Nanak wanted to stay with his sister for a few days and hence went to Sultanpur and started working under the employer of his brother-in-law. During his stay in Sultanpur, Nanak would go to a nearby river every morning in order to bathe and meditate. One fine day, he went to the river as usual but did not return for three days. It is believed that Nanak went deep inside the forest and stayed there for three days. When he returned, he looked like a man possessed and did not utter a word. When he finally spoke, he said, “There is no Hindu and no Musalman.” These words were the beginning of his teachings which would culminate in the formation of a new religion.

Nanak then came to be known as Guru Nanak (teacher) as he travelled far and wide to spread his teachings. He founded Sikhism, one of the youngest religions, through his teachings. The religion emphasizes on the importance of leading a spiritual life without embracing monasticism. It teaches its followers to escape the clutches of ordinary human traits, such as lust, rage, greed, attachment and conceit (collectively known as the ‘Five Thieves’). Sikhism is a monotheistic religion, which believes that God is shapeless, timeless and invisible. It also teaches the concepts of worldly illusion (Maya), Karma, and liberation. Some of the key practices of Sikhism are meditation and the recitation of Gurbani, the hymns composed by the Gurus. The religion also advocates justice and equality and urges its followers to serve mankind.

Guru Nanak taught that every human being is capable of attaining spiritual perfection which will ultimately lead them to God. He also said that rituals and priests are not required in order to have direct access to God. In his teachings, Guru Nanak emphasized that God has created many worlds and also created life. In order to feel the presence of God, Guru Nanak asked his followers to repeat the name of the God (Nam Japna). He also urged them to lead a spiritual life by serving others and by leading an honest life without indulging in exploitation or fraud. 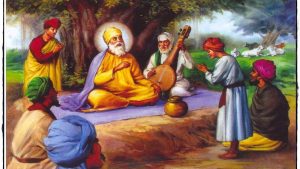 Guru Nanak was determined to spread the message of the God. He was saddened by the plight of mankind as the world was fast falling prey to the wickedness of Kaliyug. Hence, Guru Nanak decided to travel across the subcontinent to educate the people. It is said that he undertook five journeys (udasis) in his lifetime. Before beginning his first journey, Guru Nanak is believed to have visited his parents to explain them the importance of his journeys. During his first journey, Guru Nanak covered most parts of present day India and Pakistan. This journey lasted for seven years and is believed to have taken place between 1500 and 1507 AD. In his second journey, Guru Nanak visited most parts of present day Sri Lanka. This journey too, lasted for about seven years.

In his third journey, Guru Nanak travelled through the difficult terrains of the Himalayas and covered places like Kashmir, Nepal, Tashkand, Tibet and Sikkim. This journey lasted for about five years and took place between 1514 and 1519 AD. He then travelled to places like Mecca and most parts of Middle East in his fourth journey. This lasted for about three years. In his fifth and final journey, which lasted two years, Guru Nanak focused on spreading the message within the region of Punjab. He was accompanied by Bhai Mardana in most of his journeys. Though the authenticity of these journeys is challenged by scholars, it is believed that Guru Nanak spent 24 years of his life in his journeys, covering a staggering distance of 28,000 kilometers by foot.

Guru Nanak’s preaching came at a time when there were conflicts between various religions. Mankind was so intoxicated with pride and ego that people had started fighting against each other in the name of God and religion. Hence, Guru Nanak began his teachings by saying that there are no Hindus and no Muslims. This implies the fact that God is one and that He is only seen differently through various religions. Guru Nanak’s teachings, although not intended, contributed to the unity of Hindus and Muslims to an extent. He also emphasized on the importance of equality of mankind. He condemned slavery and racial discrimination and said that all are equal. 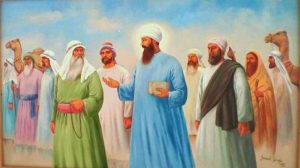 Guru Nanak is one of the most important religious figures to have contributed to women empowerment in India. Guru Nanak appealed to his followers to respect women and to treat them as their equal. He said a man is always bound to women and that without women there would be no creation on earth. He also restored the faith in God by saying that the Creator is deeply involved in what man is trying to achieve on earth. While most of the major religions including the sects of Hinduism and Buddhism advocated monasticism in order to achieve salvation, Guru Nanak came up with a religion that supports the lifestyle of an average householder. Most importantly, he also taught his followers the methods to attain salvation while leading a normal life within the society. He, in fact, stressed on the importance of leading life with one’s family members. Not only did he teach his ideals, but he also served as a living example. When Guru Nanak left for the heavenly abode, nine other Gurus followed his teachings and continued to spread his message. 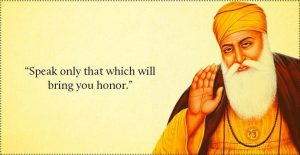 Through his teachings, Guru Nanak had become extremely popular among both the Hindus and the Muslims. His ideals were such that both communities found it ideal. They both claimed Guru Nanak to be one of their own and needless to say, Guru Nanak’s ardent followers who called themselves the Sikhs (disciples) were also in the race along with the Hindus and the Muslims. According to the legend, when Guru Nanak approached his final few days, a debate between Hindus, Muslims, and the Sikhs arose as to who should be given the honor to perform the last rites. While Hindus and Sikhs wanted to cremate the mortal remains of their Guru as per their custom, the Muslims wanted to perform the last rites according to their beliefs. When the debate failed to conclude amicably, they decided to ask Guru Nanak himself as to what needs to be done. When they all approached him, Guru Nanak asked them to bring flowers and lay them next to his mortal remains. He asked the Hindus and the Sikhs to place their flowers on the right side of his body and the Muslims to place theirs on the left. He said that the honor of performing the last rites would go to the party whose flowers remain fresh for a night. When Guru Nanak breathed his last, the religious communities followed his instructions. When they came back the next morning to see whose flowers remained fresh, they were surprised to see that none of the flowers had wilted, but the biggest surprise was that Guru Nanak’s mortal remains had disappeared and all they could see in place of his body were fresh flowers. It is said that the Hindus and the Sikhs picked up their flowers and buried it, while the Muslims did the same with their flowers.