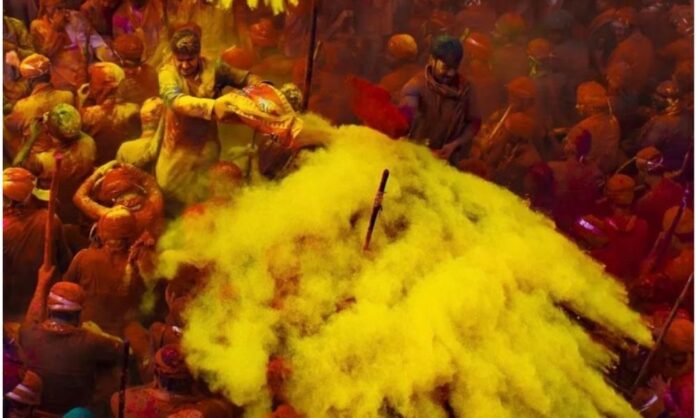 Holi, the festival of colors, is celebrated all across India with pomp and zeal along with bright colors, dance, music, and good food. But there is something special about the Holi celebrations in Vrindavan, Mathura, Barsana, and Nandgaon which are deeply associated with the history of the ancient Hindu festival. The festivities here are inspired by the mythological stories of Radha and Krishna.

History of Holi celebrations in these places

Mathura is Lord Krishna’s birthplace and Vrindavan is the place where he spent his childhood. According to legends, the dark-skinned Krishna feared that the fair-skinned Radha might not like him. Therefore, his mother Yashoda suggested smearing Radha’s face with color. He went to Barsana from Nandgaon to color Radha but was playfully beaten up with sticks which led to the tradition of Lathmar Holi.

How is Holi celebrated in Mathura?

About Lathmar Holi in Barsana and Nandgaon

Holi celebrations in Nandgaon and Barsana are popular for Lathmar Holi. Barsana is Radha’s village and Krishna went there to playfully color Radha but was beaten with sticks. According to tales, Radha’s friends also traveled to Nandgaon the next day to color Krishna. Even today, men travel from Nandgaon to Barsana to play Holi with the women but are playfully chased with sticks.

The Banke Bihari Temple in Vrindavan is popularly known for celebrating Phoolon ki Holi or flower showers. The event takes place in the temple every year on the Ekadashi before Holi for 15-20 minutes. Widow’s Holi at Vrindavan’s Gopinath Temple is also well-known where widowed women are allowed to play Holi. The tradition was popularized by widows of Pagal Baba Vidhwa Ashram in Vrindavan.

Holi celebrations in Vrindavan are incomplete without visiting the Banke Bihari Temple. The temple hosts a week-long celebration during which Lord’s idol is adorned with white-colored clothes so that the colors can get smeared over him. People here chant the praises of Krishna while dancing with immense energy. Here, Holi is played using organic gulal and colored water, and celebrations end by 1 pm.