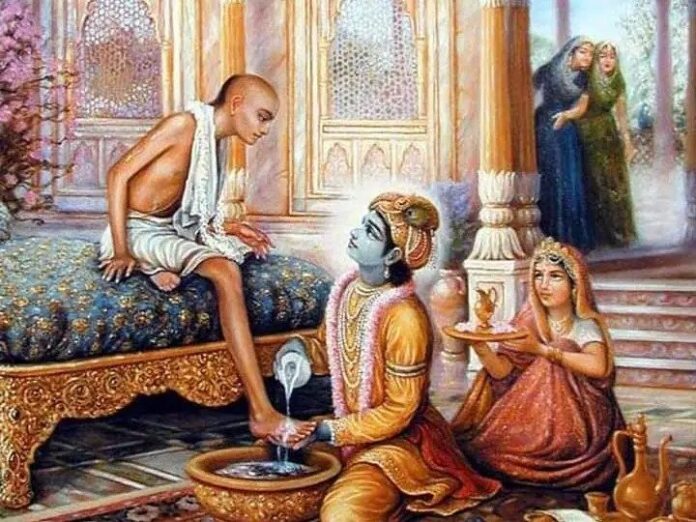 Krishna and Sudama were childhood friends who studied together. Krishna became a king in the future. Sudama was living under penury. Once Sudama’s wife told him, “See, Krishna is your very close friend. Why don’t you go and ask him for some help?” Sudama feeling a little shy said, “How can I ask a friend for something? I don’t feel like doing it.” But when there was no other way, he decided to meet Krishna.

There is a custom in India that when you go to meet somebody, you don’t go empty-handed. So what could he take? He had nothing. His clothes were torn. He was so poor! And then at home, he had few rice krispies. So, he packed them in a piece of cloth and took them to Krishna.

He entered the palace. It was gorgeous and beautifully decorated. Krishna was sitting on his throne, and there were so many servants around. And the moment he saw Sudama, he rushed down, and washed his feet, and offered him his own seat. He put him on the throne. And then Krisha asked Sudama, “What have you brought for me? Come on! Give me.”

He knew that Sudama was shy and that he was trying to hide his rice krispies. “How I can offer these rice krispies?” asked Sudama, But Krishna grabbed hold of it, and then he ate it up. The joy of meeting his old friend was so much that Sudama even forgot to ask anything and forgot why he had come to meet his friend and Krishna forgot to give him anything! They both forgot!

When two souls meet in such deep friendship, they forget everything. Sudama thanked Krishna and left the palace.

And it is said, when Sudama went back to his home, he found his whole house was transformed, and he had all the riches in his house. His wife was very happy. Somebody had come with a lot of gifts-with nothing said or asked.

What is the sign of a good friend? When you go to a friend with a problem, if you come away feeling lighter, then that is a good friend.