Ramananda Sagar’s Ramayana has arrived for a rerun on Doordarshan after three decades and it has been declared an instant hit. The Twitter users, the Millenials who are probably watching the show for the first time, have pointed out an actor – Aslam Khan who has played the most roles in the show.

From a demon and a sage to a villager and a monkey in the ‘vanaar sena’, Aslam Khan has seemed to have played it all! The Twitterati have created memes about the actor calling him the ‘KL Rahul of Ramayana’ and the images of the actor were made viral on social media. The actor has also essayed roles in other mythological shows like Krishna and Alif Laila. The viewers also pointed out the versatility of the actor and appreciated him. 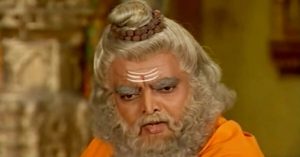 “A very proud moment for me right now and thanks for airing the #RamayanaOnDDNational as my father Sir Aslam Khan has been a part of a major supporting role. A very thanks to all the Ramayan Team @SagarRamN @TheArunGovil @DipikaChikhalia @LahriSunil @imArvindTrivedi @DDNational.”

The cult TV series Ramayana was ordered for a retelecast amid the national lockdown in the country since the 24th of March. The show that first aired in 1987 was directed by Sagar featured Arun Govil as Ram, Deepika Chikhalia as Sita and Sunil Lahri as Lakshman. The show also featured the late Dara Singh as Hanuman and Arvind Trivedi as Raavan.

On its rerun, according to the data by Broadcast Audience Research Council, the first four episodes of the show garnered 93.3 million viewers. The data also says that on the first weekend, Sunday, the show got a viewership of 51 million which is the highest ever figure for a Hindi General Entertainment Channel since 2015.

While some have criticized the move as another attempt by the government to push the Hindutva agenda, there were other shows that are ordered for a rerun. The shows include Mahabharata, Circus starring Shah Rukh Khan and Byomkesh Bakshi. The return of these shows has sparked nostalgia and warmth among the people during the tough phase of lockdown.