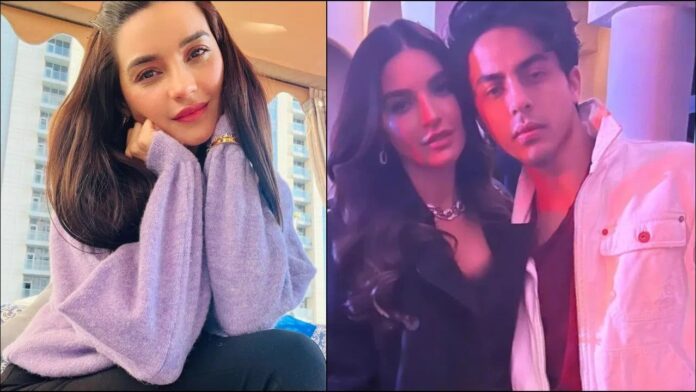 After Shah Rukh Khan’s son Aryan Khan was spotted with Pakistani model-actor Sadia Khan, rumours about them dating started making headlines. The two supposedly met during New Year celebrations in Dubai. Sadia has now denied the buzz and wondered how people cook up such stories on the basis of a picture.

Speaking to UAE publication City Times, the actor said, “It is very strange how people are making up stories about myself and Aryan without knowing the full picture. There needs to be a limit to all that goes around in the name of news.”

Giving deets about their meeting and the photo that went viral, Sadia Khan revealed that they did meet on New Year’s Eve and even spoke, before they got clicked together. “This doesn’t mean that we are dating. I am not the only one who took a picture with Aryan either; there were a few other people who clicked pictures and they also uploaded them, but somehow I am the one whose picture is floating around,” she said.

She also denied that there’s anything romantic between the two, and called all the rumours ‘baseless’, though did mention how Aryan is ‘very sweet and extremely well-mannered’. Sadia was quoted, “I deny all the rumours as baseless and I would say that Aryan is very sweet and an extremely well-mannered boy. So, please stop all these baseless rumours about us. Love and respect!”

Sadia Khan is know for her role in both seasons of the Pakistani show Khuda Aur Muhabbat. She has also worked in various films. She had shared the picture with Aryan on her Instagram stories a couple of days ago. She had captioned the story, “Throwback to the New Year’s Eve.” In the picture, Sadia is seen wearing a black dress and a black coat, while Aryan is wearing blue jeans, a red T-shirt and a white jacket.

Aryan Khan, on the other hand, is now gearing up to make his debut in Bollywood as a writer-director. He had announced this with a picture of a spiral bound script. He had captioned the post, “Wrapped with the writing…can’t wait to say action.”