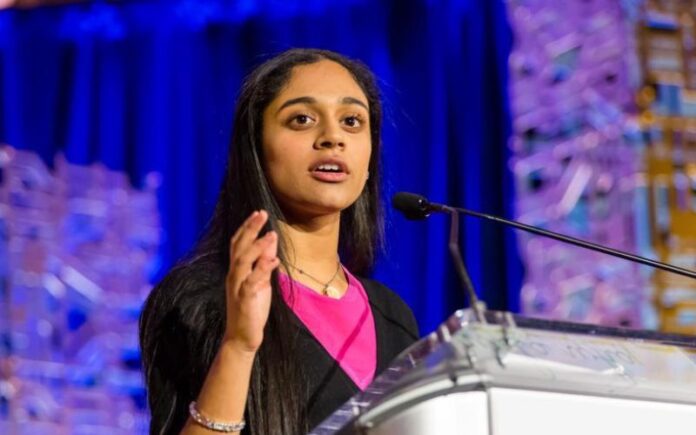 Who is Trisha Prabhu? A student, a woman, a leader, an entrepreneur? Yes. But most significantly, she is a generation Z youth. Why that matters has to do with what she does. The issue the 20-year-old has picked to confront, alter and eventually eradicate with her novel innovation, ReThink, is cyberbullying.

To the generation plugged in 24/7 and therefore at the largest receiving end of the internet’s good, bad and ugly, cyberbullying hits close to home. It comes with the package of being digital natives. Who better, then, to charge at the monster full throttle and defang it?

It’s exactly what Prabhu believes in too. Cyberbullying, she says, is something a lot of adults “just don’t get.”

“They thought it’s a rite of passage, something everyone goes through,” she tells us. “As a young person, I knew the damaging effects it could have on someone’s mental health and how it scars them for life. Sure, I don’t know everything there is to know. But I do know this is an important issue and I want to do something.”

And so at 19, she incepted ReThink. It is a patented technology that seeks to stem cyberbullying at the source. On downloading the ReThink app, a custom keyboard alerts the user of possible hate speech or offence in the message they are on the verge of sending. Kind of like a “Woah, are you sure?” exclamation, Prabhu explains.

“How can we teach people to reclaim that humanity that is so fundamental to all of us?”

ReThink research shows 93 percent of the time, adolescent users ‘rethink’ and change their minds about sending the message. One less person bullying, and probably one less person bullied, in the world. The award-winning solution, with results to show, has been recognised (to name a few) by Forbes, Shark Tank, the White House, Massachusetts Institute of Technology, and Harvard University, where she is currently an undergraduate.

Who Is Trisha Prabhu And What Prompted Her Towards Internet Safety?

A first-generation Indian immigrant, Prabhu’s first deep-affecting encounter with cyberbullying was when she was only 13. The Rebecca Sedwick case – the suicide of a 12-year-old prompted by abject online bullying – shook her

“I came home from school and read the news. Rebecca Sedwick had been cyberbullied for over a year and a half. I remember thinking then, ‘something is wrong here.’ The internet was not created to be a place that tears people down but instead connects everyone.”

Also Read: 6 Startup Tips From a Young And Successful Entrepreneur

Silicon Valley big tech that brought about a revolution in the way the internet is used did bring with it an initial promise to set ethical boundaries in the expanse of the online universe. Certain checkpoints, some regulations. But has that protected persons from marginalised communities from racism, sexism, communalism? Why are our DMs and comments cluttered with violent threats and unsolicited selfies? Are the safety valves as tight as they should be?

Numbers, alarmingly, show they are not.

As per the Cyberbullying Research Centre, in 2018 one-third of youths across the US claimed to have been cyberbullied while one in ten persons admitted to being the perpetrator. The research further showed that students bullied were more two times more likely to attempt suicide and self-harm. In India too, the statistics aren’t heartening. National Crime Records Bureau (NCRB) data shows that in 2019, there were 8379 cyber crimes against women and 305 against children. Indiaspend data from last year further notes that half the cases go unreported.

While Prabhu’s research indicates women are among the most cyberbullied populations on the internet, they are also disproportionately the perpetrators. Intersectionality makes it just that much more complex. Just being of colour, certain gender identities, minorities “guarantees a tougher digital experience,” she says.

Young Leaders, Show Us The Way…
Seeing how ReThink, as it grows, is proving successful in its endeavour to transform teen behaviours, what was it about cyberbullying that adult multi-billion tech giants missed that Prabhu caught on to?

“They didn’t probably realise that the decisions you make on technology are permanent. You can go back and delete a nasty message but someone’s already screenshot it and sent it to someone else. And so a permanent record of that message lives on,” she says, reiterating why ReThink comes as taught behaviour.

“A lot of what informs cyberbullying of women and minorities is the belief among men or more dominant groups of what is the right power balance. Technology has a lot of potential to transform culture, to inform and educate,” Prabhu says knowingly. “The key to getting there is to make sure that people who are building the technology look like the people using it. The tech space today is so male-dominated and skewed, in particular, to white men. We don’t see women, women of colour, of different backgrounds. So how can we build technology that can speak to all people and is inclusive?” she says stressing on the urgent importance of transforming the workforce.

A supportive ecosystem will also come when there are women on the other side of the table, the investor space that Prabhu one day hopes to confidently step into, that will ensure that the tech opportunities under-represented groups are building are here to effectively and constructively stay.

On what empowers her as a young CEO, Prabhu finds motivation in the sisterhood that surrounds her – family, friends, global strangers, those that inspire her, those she is inspiring to break into tech. With the democratisation of the internet, it is a large pool of speakers, thinkers, innovators, gamechangers we are looking at today. And like Prabhu, most of them are young and have voices that are only getting louder, refusing to be silenced.

Greta Thunberg and Malala Yousafzai are standing examples, whom Prabhu names as her role models. Michelle Obama, a favourite across ages, is the third.

The real world is routinely and not dishonestly dubbed ‘the big bad.’ Big and bad – two intimidating crevices. Yet, the young remain unfazed by it. More than a threat, the difficult state of the world – our world – comes across as a challenge that once overcome shall bridge differences, bring peace and break barriers that divide us. And as long as “the power that feeds her,” as Prabhu puts it, and the million others like her is alive, so is the dream.

Why Math Worksheets? What Can They do to Help Improve Your Kids’ Math Skills?

Fetching the best deals on the Internet