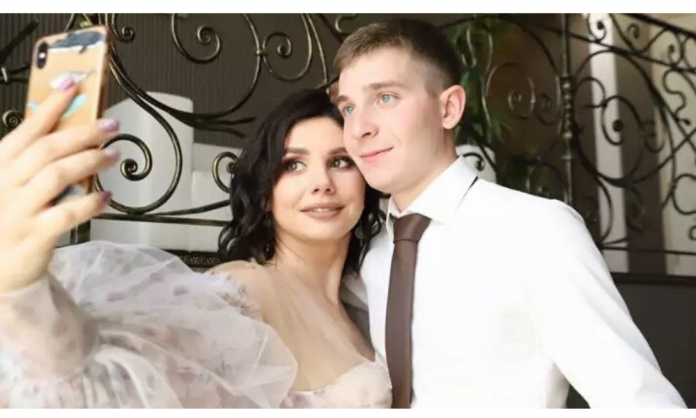 An influencer who split up with her husband before beginning a relationship with his 20-year-old son has shared her wedding photos.

Marina Balmasheva, 35, from the Russian region of Krasnodar Krai, lived with her ex-husband Alexey, 45, and his son for more than 10 years.

After they divorced, Marina found love once again, this time with her 20-year-old stepson Vladimir ‘Voya’ Shavyrin.

The couple announced that they planned to marry earlier this year and they married last week at a registry office.

Marina shared the photos of her wedding for her 433k followers on Instagram, as well as a video of them signing the legal documents and sharing a kiss.

The happy bride captioned the video with the message: “We drove to the registry office, I didn’t even have a hairbrush with me. The rings were in the car. There was a good mood and a little embarrassment.”

Marina said: “After the registry office, we dressed in typical wedding attire and enjoyed a nice reception at a local restaurant with several guests.”

She added that the wedding has not affected their relationship, although they both admitted that they are not speaking to her ex-husband, the groom’s father.

Marina said: “I think he does not like what we have done.”

She added: “We are expecting a baby and we now want to move to a bigger city.”

Marina lived with her husband Alexey for over 10 years before the relationship ended in divorce.

Before they broke up, the couple adopted four children including the youngest with Down syndrome. All of the other kids still live with Alexey after he won custody, according to local media.

She posted a photo of her holding up a pregnancy test while cuddling Vladimir on 7 June. Marina announced they are expecting a boy on 11 July.

Earlier this year, Marina caused a stir after she shared a throwback photo.

The image was from 13 years ago and showed her and her new husband Vladimir when he was just seven years old. The photo was taken at around the time she married his dad Alexey.

Marina became famous in Russia after she appeared on a documentary that followed her weight loss journey.

She also appeared on Russian TV show Pryamoy Efir (On Air) in March, where she shared details on the situation with Vladimir.