What Is Signal App, and Why Is Everyone Using It? - THN News 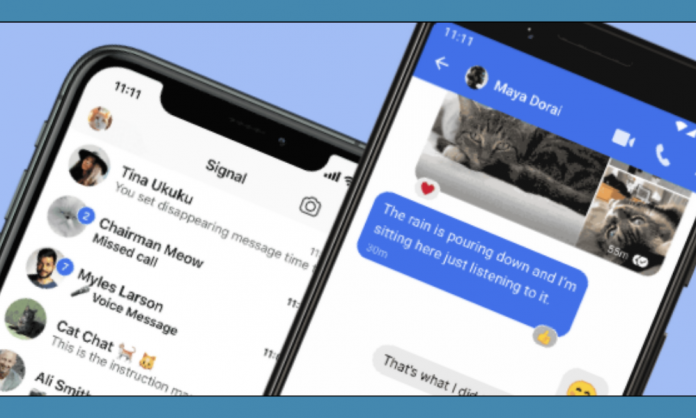 Signal is a secure encrypted messaging app. Think of it as a more private alternative to WhatsApp, Facebook Messenger, Skype, iMessage, and SMS. Here’s why you should seriously consider switching to Signal.

Why Signal Is Special

Signal is available for Android, iPhone, and iPad. There’s also a Signal desktop client for Windows, Mac, and Linux. To join, all you need is a phone number. It’s free.

The user experience of Signal is just like WhatsApp, Facebook Messenger, and other popular chat apps. It’s a messaging app with features like one-to-one messages, groups, stickers, photos, file transfers, voice calls, and even video calls. You can have group chats with up to 1000 people and group calls with up to eight people.

Signal isn’t owned by a big tech company. Instead, Signal is developed by a non-profit foundation and is funded by donations. Unlike Facebook, Signal’s owners aren’t even trying to make money. Signal doesn’t try to gather a bunch of data on you or show you advertisements.

While Signal has a very familiar interface, it’s very different under the hood. Your conversations in Signal are end-to-end encrypted, which means that not even the owners of Signal can monitor them. Only the people in the conversation can see them.

Signal is also completely open-source. The source code for the project’s client apps and server software is available on GitHub.

How (and Why) Signal Is So Private and Secure

All communications on Signal—including one-to-one messages, group messages, file transfers, photos, voice calls, and video calls—are end-to-end encrypted. Only the people involved in the communication can see them. The encryption happens between the individual devices using Signal. The company that operates Signal could not see these messages even if it wanted to. Signal actually created its own encryption protocol for this.

This is very different from traditional messaging apps. For example, Facebook has access to everything you say in Facebook Messenger. Facebook says it won’t use the content of your messages for advertising, but are you confident that will never change in the future?

Sure, some other messengers offer encrypted messaging as an optional feature. But everything on Signal is encrypted, always and by default. Signal also offers other privacy features, including self-destructing (disappearing) messages that will automatically be removed after a period of time.

Facebook Messenger collects a lot of data about you, too. Most companies collect a lot of data. Signal tries not to.

Even if Signal is subject to a subpoena on you and forced to disclose what it knows about you, the company knows almost nothing about you and your Signal activity. Signal could reveal only your account’s phone number, last connection date, and account creation time.

Everything in your Signal app—messages, pictures, files, and so on—is stored locally on your phone. You can manually transfer data between devices, but that’s it.

Why Is Signal Suddenly So Popular?

Signal’s end-to-end encryption is its big feature. That’s why so many people are using Signal—because they’re concerned about privacy. At the start of 2021, it’s been endorsed by everyone from Elon Musk to Twitter CEO Jack Dorsey and has shot to the top of Apple and Google’s app store charts.

But Signal didn’t come from nowhere—it was founded in 2013. It’s a widely respected piece of software that’s long been used by privacy advocates and other activists. Edward Snowden endorsed Signal back in 2015.

Signal Identifies You by Your Phone Number

While your communications on Signal are private, you aren’t anonymous. To sign up for Signal, you need a phone number. To talk to someone on Signal, your phone number is your identifier on Signal.

That’s by design—Signal is designed to be a drop-in replacement for SMS. When you sign up for Signal and install the app, it will ask for access to the contacts on your phone. Signal securely scans your contacts to see which of them are also Signal users—it just examines the phone numbers and sees if those phone numbers are also registered on Signal.

So, if you and someone else communicate via SMS, you can both install Signal and easily switch. If you install Signal, you can see which of your contacts you can message via Signal instead of SMS. You don’t have to ask them what their Signal handle is—it’s just their phone number. (However, you can verify the safety numbers associated with a conversation to ensure you’re talking directly with the person you think you are. That’s another useful security feature in Signal.)

How to Get Started With Signal

Signal is simple to get started with. Just download the official Signal app from either Apple’s App Store for iPhone and iPad or Google Play for Android. Go through the setup process to give Signal a phone number and access to your contacts. (Contact access is optional, but Signal is designed to work best with it.)

You can then start conversations from within the app. If you have someone in your contacts and that person’s phone number is associated with a Signal account, you’ll see that you can contact them on SIgnal. It’s seamless.

Want to start talking with someone on Signal instead of a different chat app? Just ask them to download it and sign up. You’ll even get a notification when someone you know signs up for Signal.

You can also download the Signal desktop app for Windows, Mac, or Linux from the SIgnal Foundation’s website. This will sync messages from the Signal app on your phone to your computer. However, it’s optional.