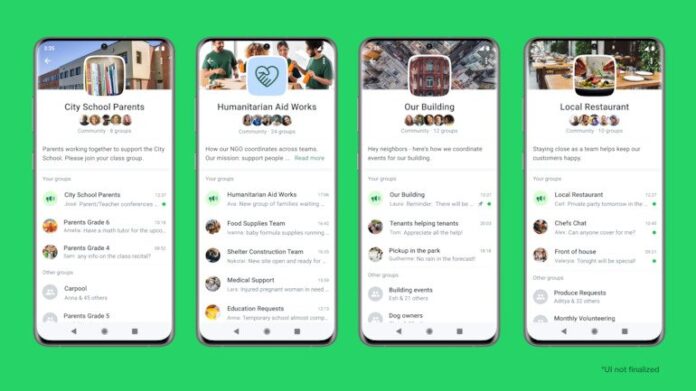 “Today we are excited to share our vision for a new feature we are adding to WhatsApp called Communities. Since WhatsApp launched in 2009, we’ve been focused on how we can help people have the next best thing to an in-person conversation when they want to talk to an individual or a group of friends or family. We also frequently hear from people who are using WhatsApp to communicate and coordinate within a community,” WhatsApp stated in the blog post.

What are WhatsApp Communities?

The Communities on WhatsApp will bring thousands of people under one group. Users will be able to let users add several groups to one community. WhatsApp will allow people to bring together separate groups under one roof with a structure that works for them.

When a lot of groups with similar interests are brought together, people will be able to receive updates sent to the entire Community and easily organize smaller discussion groups on what matters to them.

Just like groups, communities will also have admins to moderate the groups, everything else that takes place.WhatsApp will roll out powerful new tools for admins, including announcement messages that are sent to everyone and control over which groups can be included.

Using Communities, a School Principal can bring all the parents of the school together to share must-read updates and set up groups about specific classes, extracurricular activities, or volunteer needs.