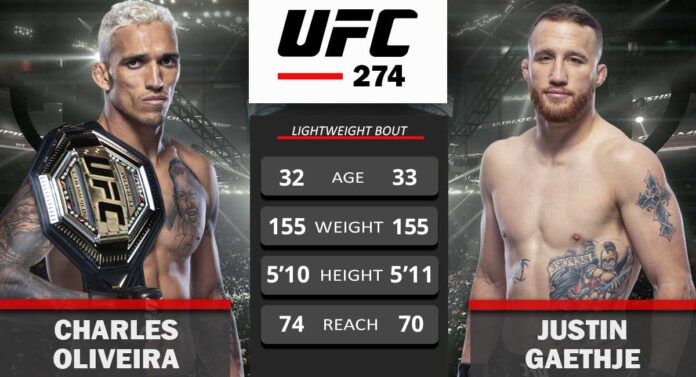 Fans of mixed martial arts competitions located in Arizona will be delighted to learn that UFC 274: Oliveira vs. Gaethje is coming to the state as some of the top fighters in the promotion will be heading into the Octagon at the Footprint Center in Phoenix, Arizona, on May 7, 2022.

Naturally, there will be a huge buzz surrounding the upcoming sporting event as there are a host of top names on the fight card, with both Charles Oliveira and Justin Gaethje headlining the night as they go head-to-head in a UFC Lightweight Championship bout, with Oliveira the current champion.

With such a stacked card, there will be plenty to look out for on May 7, 2022, and this article will try to break down what viewers should be able to expect when the action takes place, whilst also aiming to provide some insight regarding what could happen in the Octagon come fight night.

What fights are scheduled for UFC 274?

There are no fewer than 14 fights scheduled to take place at the Footprint Center in Phoenix, Arizona, with two of these being title fights.

What are the biggest contests?

Naturally, although there are 14 exceptional bouts on the card, there is no denying that there are a couple of fights that will undoubtedly be considered the headliners for this particular event, with some of them likely to appeal for a variety of different reasons.

Those fans who enjoy being able to participate in sports betting in Arizona will have likely already checked out the odds that are available, with Unibet having already prepared the odds for fights including the encounter between Charles Oliveira and Justin Gaethje, and the contest that will feature Rose Namajunas and Carla Esparza.

It perhaps does not come as a surprise that both of the champions – Oliveira and Namajunas – have been priced as favorites for their respective title bouts, with punters able to get some good odds on the matches that feature both the ranked #1 and #3 individuals in their respective weight divisions.

In addition to the two championship bouts, though, there is also the contest between Michael Chandler and Tony Ferguson; a match that will see two of the most experienced Lightweight fighters compete against each other in the Octagon. Chandler has been made a rather large favorite to overcome his opponent.

Naturally, although there is still some time before the event takes place, many will already be looking to try and make their own predictions about what will happen at UFC 274: Oliveira vs. Gaethje after learning what the fight card is.

Of course, with so many intriguing matches scheduled with many experienced fighters, there is a lot to consider when trying to think about what may happen when they each step foot in the Octagon.

As we highlighted previously, there are three fights that can be argued to be amongst the biggest on the fight card, with the two championship fights and the bout between Chandler and Ferguson.

Many are already favoring the odds that have been created in regard to each of these fights, with it seeming that many would feel that it would be a real surprise if there was a title change on the night.

There is no denying that UFC 274: Oliveira vs. Gaethje has all of the ingredients to be an exceptional event, and it would be a surprise if everyone watching the spectacle in Phoenix, Arizona, and around the world would end up feeling rather disappointed with what they see on the night come May 7, 2022.