While many politicians, including Prime Minister Narendra Modi, have buckled down in their efforts to stop the spread of coronavirus outbreak in the country, some politicians like the Trinamool Congress leader Nusrat Jahan are busy ‘entertaining’ people with their dance moves.

Following the crippling nationwide lockdown that hobbled economic activities and deprived the daily wage labours of food and jobs, many politicians presided over the task of distributing food to the needy in their respective constituent assemblies. However, the Basirhat MP Nusrat Jahan did not consider it worth going through the rigamarole of distributing food and items of daily necessities to those in need in her constituency. Instead, the actor-turned-politician was occupied with uploading her dancing videos on the popular video-sharing app TikTok.

In fact, when social media users called her out for her apathy towards the sufferings of the people of in her constituency, she brazened it out on Twitter by sharing another video and saying, ‘An Artist always entertains’ while terming those who questioned her misplaced priorities amidst calamity as ‘trolls’.

Earlier, the people of a village in Nusrat’s constituency, Basirhat, staged a protest for the paucity of food during the nationwide lockdown. There is simmering discontent in the region as locals have protested against the lack of or irregularities in ration distribution. Recently, there occurred a pitched battle between people and the police in the Baduria district of Basirhat. The residents of the village have alleged irregularities in the distribution of relief. Several policemen sustained injuries in the clashes, including the officer in charge of Baduria police station. 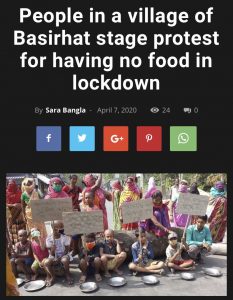 However, the MP of Basirhat, Nusrat Jahan, had no concerns for the tribulations faced by the members of the constituency that elected her to the parliament. Instead, Nusrat brazenly defended herself, sharing another video while exhibiting a blithe indifference to the starving people in her constituency.

The Mamata Banerjee-led TMC government in West Bengal is accused of bungling the coronavirus measures in the state. Tensions have run high between West Bengal chief minister Mamata Banerjee and governor Jagdeep Dhankhar after angry exchanges over issues like curfew protocols, coordination on relief measures and the visit of a central team to check for coronavirus measures.

Fearing that the extent of coronavirus outbreak in the state is underreported, the inter-ministerial central team(IMCT) had sought the methodology from the West Bengal Audit Committee that they used in ascertaining the number of coronavirus deaths in the state.