Uncovering the truth of Master Shifuji: An Imposter or A Patriot? - THN News 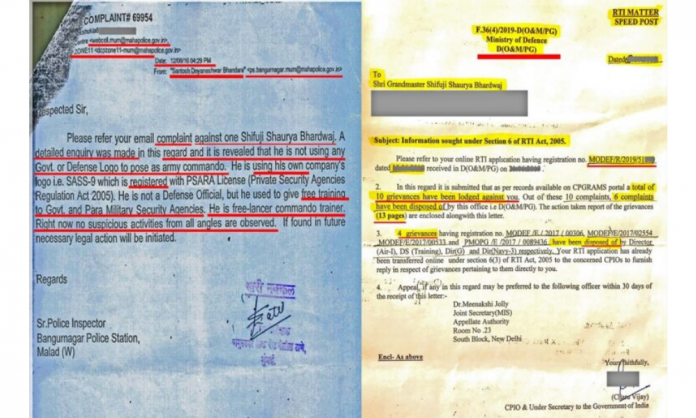 Grandmaster Shifuji Shaurya Bhardwaj has always been in the news mainly for his bold Nationalists apolitical remarks. He is known to spread Staunch Patriotism through his videos and mass public speeches. He is respected and regarded worldwide by the Experts and Legends of Counter-Terrorism, Counter-Insurgency but why is he being defamed and continuously trolled in India.

Is Grandmaster Shifuji Shaurya Bhardwaj a Fraud or a genuine commandos Mentor?

Allegations Vs. Reality as per closure reports-

He is regularly accused of donning a military dress with a maroon beret, Marcos badge and balidan insignia, his credentials as a freelance trainer and freelance commandos mentor to the Special Forces and armed forces have often been questioned. Few communists and leftist-led houses and a few suspected anti-national elements question his patriotism and even boldly ask him about his contribution to youth, women empowerment, and the Nation.

There is no single evidence online and offline to establish the fake allegation of him being an army impostor. However, he has always declared that he has provided his MITTI System’s mentoring services to the Elite Special Forces, Indian armed forces, paramilitary forces, state police, and enforcement agencies. He has provided his completely “Free of Cost” mentoring services, trained many specialised military units in his long career as a freelance commandos mentor, freelance commando trainer, and is instrumental in developing customised close armed combat and requirements based strategic training programs for both the Armed forces and state-level forces.

What is the issue with Grandmaster Shifuji’s military uniform?

Why has this controversy arisen again?

Most of the articles mentioned above, contained the material and information sought by the following Sources-

The sources mention that Grandmaster Shifuji’s Legal team is challenging the response of the India Navy because that reveals the information related to training (covered under section 8 of the RTI ACT 2005 which restricts it to maintain the confidentiality of Special Forces Training Modules and every information.)

RTI Expert’s Opinion: Particular RTI answered on misleading baseless questions about Grandmaster Shifuji with Indian Navy. In 99.9% cases, any such RTI is denied under section 8 of the RTI act.

Claim Source– Article of An Indian news portal-Dated- Tuesday, May 9, 2017. The news article – This girl and her friend (male) lodged complaint against Grandmaster Shifuji Shaurya Bhardwaj.

The same complainant, the Lady Biker is BANNED now, based on MILITARY INTELLIGENCE Letter written to all seven commands Dated May 7 2018.

Claim Source- This comlainant circulated a complaint letter on social media in December 2016.

He mentioned the address of Grandmaster Shifuji in the complaint letter and violated the Right to privacy of Shifuji’s family? He wrote this complaint letter on December 13, 2016, but as per official records the Complaint he mentioned 69954 closed on the 12/08/16 (as mentioned in closure report by Mumbai Police ) even after it was public that the Complaint is disposed and does not Merit an FIR.

Since some politician executives and opportunists were waiting to defame him, they initially tried to show everyone that he is ex-Army personnel. When this manipulation of him being an army officer was all over social media they declared him an imposter by taking advantage of his dress sense.

In this country, everyone has a right to give his assistance in Nation-building. Indian Armed Forces are not someone’s private property. Grandmaster Shifuji as a citizen has the right to assist the nation irrespective of the case as to whether he is asked on invitation or he wishes to.

Shifuji has a huge number of followers and this was done exactly to defame him. Nobody has any proof but you know how social media manipulation works. Thankfully, Grandmaster Shifuji has never given attention to such trolls.

Complaints lodged against Grandmaster Shifuji in 2016-17: A CLEAN CHIT