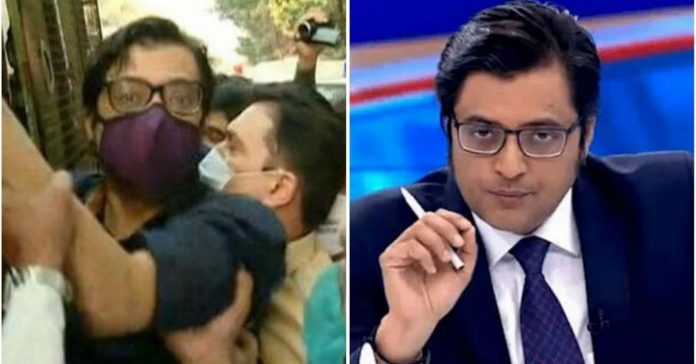 A police team swooped on the Republic TV’s chief and picked him up from his home even as his family protested while his colleagues started rushing to the spot for live coverage.

Here is all you need to know about 2018 suicide abetment case:

A 53-year-old interior designer and his mother allegedly committed suicide in 2018 over non-payment of dues by Arnab Goswami. The suicide note purportedly written by Anvay Naik, managing director of Concorde Designs Private Limited, said he was forced to take his life as he was not paid dues of Rs 5.40 crore by the three accused.

Adnya Naik, daughter of interior designer Anvay Naik, claimed earlier this year that Alibag Police in neighbouring Raigad district did not probe the non-payment of dues which had driven her father and grandmother to suicide.

The Maharashtra government said in May this year that it had ordered reinvestigation by the CID into the suicide of a 53-year-old interior designer and his mother, allegedly over non-payment of dues by TV journalist Arnab Goswami and two others.

State Home Minister Anil Deshmukh said he ordered reinvestigation after Adnya Naik claimed that Alibag Police did not probe the non-payment of dues.

Republic TV had then denied the allegation and said that certain vested interest groups were running “a false and malicious campaign and making false statements and innuendos against the company by exploiting the tragic event”.

Police on Wednesday raided Goswami’s home and arrested him for allegedly abetting suicide of Anvay Naik. The official said a team of Alibaug police picked up Goswami from his residence here. Goswami, who was seen being pushed into the police van, claimed he was assaulted by police at his home, while being taken away.