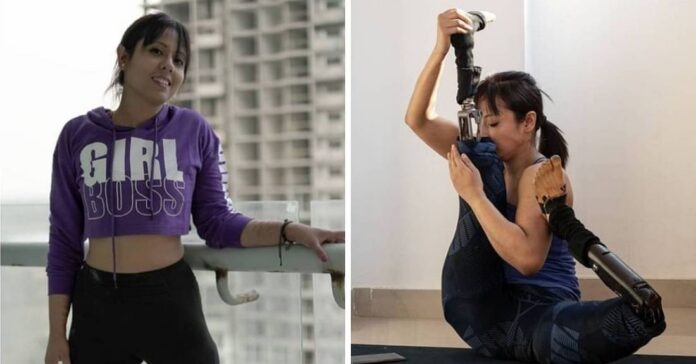 Arpita Roy vividly remembers the evening of 22 April 2006. Sitting behind a friend on a bike, she was mentally making a list of items she would buy from Kolkata. The city of joy was a 30-kilometer ride from her house in Barrackpore, and in a split second, her life was changed forever.

The bike collided with a giant lorry and she fell to the ground as the lorry ran over both her legs, leaving the 20-year-old double amputee. The next thing she heard was screaming and a large crowd looming over her head.

Though she was fully conscious, Arpita couldn’t identify the exact spot of the unbearable distressing pain until someone pointed to her blood-soaked legs. She fought off morbid thoughts and tried to move. Fortunately, a hospital was on the opposite side of the road where the accident took place.

She was given painkillers but was asked to shift to a better hospital in Kolkata given the precarious situation. Once there, the doctors recommended surgery to save her legs but due to the family’s financial situation, it was delayed by 12 days.

“My legs could have been saved, if we had enough money. I quickly swallowed the bitter pill and accepted my reality. There was no point in cooking up ‘what if’ scenarios. I stayed in the hospital for four months as the gangrene had spread to 80 per cent of my body,” Arpita recalls matter-of-factly, without a trace of self pity, to The Better India.

A devastating incident such as this would have broken anyone’s spirit but the college-going carefree girl found inner strength and a goal to become financially independent to avoid being a burden on her family.

It has been 15 years since the tragedy and today Arpita can not only stand and walk with her artificial limbs but also do yoga like a pro.

Arpita pinned all her hopes on artificial limbs, as she was assured she would be able to walk again. But the road to recovery, she says, was more difficult than the accident and amputation.

“My brother, who was the sole breadwinner, had already spent a lot for my limbs and medication. In between all this, people looked at me as if I was a burden. I wanted a job and for that I was willing to go the extra mile,” says Arpita.

During the operation, the surgical team had to do grafting by removing flesh and skin from one part of her limb to cover the damaged part. Due to this procedure the doctors suggested standing daily for an hour to ensure her posture was right.

“The effort to stand on artificial limbs would always be worsened by the phantom pain, which is pain that comes from a body part that is no longer there. It feels like someone is cutting or burning the leg. During this, I reassessed my priorities and realised when things are not in your favour, we tend to become more resilient,” she adds.

An iron-willed Arpita managed to surpass the pain and a few months later she was walking. In July 2007, she bagged a job at a call centre. She worked there for 2.5 years till she got married.

Her initial days at work were tough. Being surrounded by so many people after staying at home for almost a year was overwhelming. She would even cry on some days but managed to steel herself on her brother’s unwavering support.

If the phantom pain was taking a toll physically, her emotional trauma was not far behind. Stares, sympathies and stigma became a part of Arpita’s life. The last thing she wanted was to be treated differently.

So, when people mistook her artificial limbs for polio or injury, instead of being ashamed Arpita shared her story.

“We need a lot more sensitisation and awareness towards disability. Many people don’t know what to ask or convey the right message. Initially, I was hesitant and kept my life private. Shedding my fears and insecurities was the hardest thing I had to do,” she says.

During this period, physical exercises came to her rescue, which helped her find her true calling in yoga. She started her fitness regime to ensure she always had the right weight to fit into the artificial limbs. Being in shape eased her journey.

In 2015, she started doing yoga, something that requires flexibility, healthy knees and more importantly legs.

“It was no less than conquering a mountain. The artificial limbs made asanas difficult as one needs a lot of control over their knees. So, I started with simple exercises and gradually moved towards the complicated ones. By 2019, I knew every asana and trained to be an instructor,” she says. Before the COVID-19 pandemic, Arpita had 25 students including a couple of amputees.

Making a debut on social media without cropping her image or hiding her limbs under a long skirt was another liberating decision she made to get rid of her fears. The positive comments on her posts encouraged and inspired her to do better. For her followers, she attempted a headstand too.

Arpita has come a long way since her accident. Her life’s motto of counting blessings rather than fretting over losing her legs is what has brought her thus far. “I could have died that day or worse slipped into a vegetative state. But I was fortunate to get the artificial limbs and restart myself.”

All images are taken from Arpita Roy/Instagram