Kenya: A mother of eight children put stones in a utensil with water and put it on fire for boiling to make her hungry children believe that she is cooking food for them. The mother Peninah Bahati Kitsao, who lives in Mombasa thought her children would go to sleep while they waited for their meal. 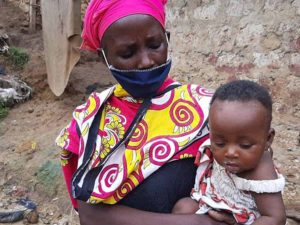 According to BBC News, Kitaso is an illiterate woman who used to work as a washerwoman in her neighbourhood.  She became redundant as people are observing social distance due to coronavirus

When her neighbour, Prisca Momanvi, saw this tragic scene, she alerted the media and also opened a bank account for her.

Kitaso started receiving money in her bank account and via mobile phone as Kenyans came forward for her help.

Kitaso is a widow, her husband was killed by an armed robber last year. She lives in a two-bedroom house without water and electricity.

She regards the help she received as a “miracle” and says: “I didn’t believe that Kenyans can be so loving. I have been receiving phone calls from all over the country asking how they might be of help,” she told Tuko news website.

“I had to devise a way of making my last born child know that there was food being prepared after she started to cry over hunger.  The rest of my children are a bit older and when I told them we had nothing to eat, they understood,” Kitaso told Standardmedia.

The Kenyan government has already launched a feeding programme as a relief for the coronavirus affected people, but it has not reached many including Kitaso.