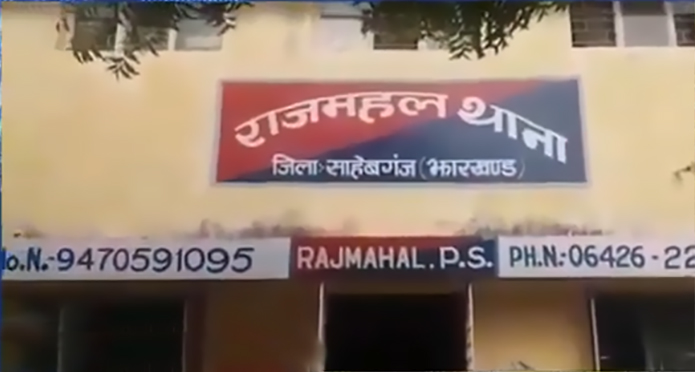 Three Muslim men accosted a lonely minor girl, gagged her mouth with a piece of cloth while threatening to slit her throat if she tried to scream, dragged her behind the bamboo bushes and took turns to rape her in Rajmahal town of Jharkhand.

The incident happened off the National Highway 80 in Naugachchi-Nawabdori area under Rajmahal police station limits of Shahebganj district around 4 pm yesterday when the 13-year-old victim had gone out to a nearby orchard to pick up mangoes that had fallen off the trees due to a hailstorm.

The incident gained significance after angry villagers gathered at NH-80, Rajmahal-Mangalhat road on Tuesday (May 26) to protest against the incident. The irate villagers set up a road blockade and also set things ablaze as they demanded immediate police intervention in the case. They shouted slogans accusing police of not taking any concrete steps to arrest the miscreants.

The father of the girl said that the incident happened at around 4 PM, and the attackers took away the girl by tying clothes on her face. They took her to a nearby bamboo bushes, and threatened that they will slit her throat if she shouts. He said that one of the accused is Sonu alias Shahmawaz who works in the army, and another one is his cousin, although he does not not know the name of the rest two.

According to the FIR in the case, the accused Shahnawaz Sheikh (son of Tahir Miya), Edgar Sheikh (son of Naeem Khan) and  Ekramul Sheikh (son of Islam Sheikh), who were loitering in the deserted orchard, suddenly spotted the minor girl, kidnapped and violated her.

After committing the crime, the alleged rapists sped away on a bullet bike — that had an Army sticker on its front number plate.

When the girl’s parents, who work as daily wage farm labourers, returned home at night, the girl narrated her ordeal to them.

According to the girl’s statement in the FIR, the incident happened around 4pm on Monday when she had gone to the orchard just behind her house amid an ongoing mild hailstorm to pick up fallen mangoes. ‘Suddenly someone accosted me from behind and threatened to slit my throat if I screamed. They dragged me to the bamboo bushes nearby and pushed me to the ground. There were two other guys — Sonu, son of Islam Sheikh, and Shahnawaz — with the stranger. As the unknown man violated me, Sonu and Shahnawaz held my arms and legs. After that Sonu and Shahnawaz also took turns to rape me. Sensing trouble, they fled from there. When my parents returned from work, I told them about my ordeal,’ the victim stated before sub-inspector Sushma Kumari.

Sensing the seriousness of the crime, the superintendent of police Anuranjan Kispotta sent SI Kumari to record the victim’s statement.

The incident has created tension in the communally charged town — which has a sizeable Muslim population that has been growing disproportionately due to the influx of illegal immigrants from Bangladesh.

As the news broke, angry mobs took to the street demanding immediate arrest of all the accused. On Tuesday morning, the villagers, led by the girl’s father, blocked the national highway 80 for hours. “I want those rapists to be caught and hanged so that one casts their dirty eyes on our daughters,” said the victim’s father.

The police which reached the NH-80 road after receiving the information and tried to pacify the furious mob by assuring that the police will do whatever it takes to arrest the miscreants as soon as possible. But the angry people did not end their protest. After which SDO Karna Satyarthi intervened and tried to convince the angry people. But the matter kept escalating. Eventually, seeing the situation go out of hands, the Deputy Commissioner and SP reached the village. DC Varun Ranjan appealed people to maintain peace and assured that the culprits will soon be arrested.

The blockade was removed after the police officers assured the aggrieved family and the villagers that one of the accused has already been arrested.

SP Anuranjan Kispotta told OpIndia: ‘The incident happened yesterday. They informed the police in the morning. An FIR has been lodged against three accused today. We already detained one of the accused, but we are not sure of his age as he is claiming to be a minor. Only after we get his medical done, we would be able to decide whether he is a minor or an adult. Of the absconding accused, we have raided the house of Shahnawaz and impounded the bullet bike that was used in the crime. We will soon catch hold the absconding accused. We will arrest them and bring them to justice.”

‘Shahnawaz works as a constable with the Indian army and is posted at army base hospital in Baghdogra,” said Kispotta who is camping at the site.

Social activist Bhudeo Kumar, who hails from Rajmahal, said: “Shahnawz’s family has been accused of similar incidents in the past. I can recall at least four such incidents when they managed to hush up the matter either using the money or muscle power and the matter would be settled even before it could reach the police. In the past three decades, Rajmahal area has seen massive demographic changes. This has led to normalisation of crime in the society. You tend to ignore such incidents until it hits you or your loved ones. It is high time, we stop sleep-walking and take cognizance of these sweeping changes in our society.”