Shadab Najar, the student from Jamia Milia Islamia University who was injured in the shooting incident at Jamia during the protests against the Citizenship Amendment Act, has lent his support for Islamic Terrorism in Kashmir. On Wednesday, he shared an Al Jazeera article along with the caption, “By raising our guns against Indian rule in Kashmir, we want to let them know that we will not accept the occupation of our land under any circumstance. We will respond to their force with force since that seems to be the only language they understand.” The words were uttered by the Commander of Hizbul Mujahideen in Kashmir, Riaz Naikoo, who was eliminated by the Indian Army in the wee hours of Wednesday. 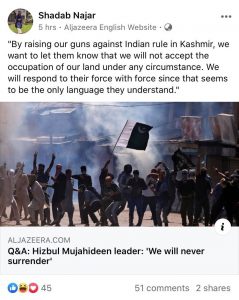 Pertinently, the words are from an interview the terrorist gave to Al Jazeera in 2018. By sharing the said words, Shadab Najar has made it abundantly clear which side he is on. His Radical Islamic inclinations have been clear for a long time. After he was shot, screenshots of his posts on Facebook had gone viral giving a clear indication about his loyalties. On 9th July 2017, Shadab had likened slain terrorist Burhan Wani to army personnel as all he did was ‘picking gun and shooting innocent’, thereby implying that Indian army shoots innocent people. In May 2018, he made yet another post which degraded the Indian Army claiming that the army personnel are raping women.

In March 2018, he yet again shared posts which claimed Indian Army is killing Kashmiri civilians. On 16th February 2019, just hours after the deadly Pulwama attack, Najar shared a Facebook post by documentary filmmaker Anand Patwardhan who cast aspersions that the terror attack was an ‘inside job’ ahead of 2019 general elections. Thus, his Facebook post after the terrorist was eliminated today comes as no surprise.

Unfortunately, Shadab is not the only Jamia student who bats for terrorists. Jamia Millia Islamia University law student Mahoor Parvez referred to the Indian soldiers who were martyred in Handwara encounter on Sunday as ‘war criminals’. “Why are you all obsessed with glorifying war criminals? These forces have illegally occupied and committed gross human rights violations in Kashmir for 70+ years. And yet the one who picks up the gun to liberate Kashmir is a terrorist to you and these are martyrs? Make it make sense,” she said.

Mahoor Parvez has now deleted her Instagram and other social media profiles. Parvez has earlier interned with a law firm, Khaitan & Co, which had later distanced itself after her hateful comments on Indian Armed Forces went viral.