“If this was Uttar Pradesh, I would have set your houses on fire”: Vikas Dubey had said to Ujjain police officials after his arrest - THN News 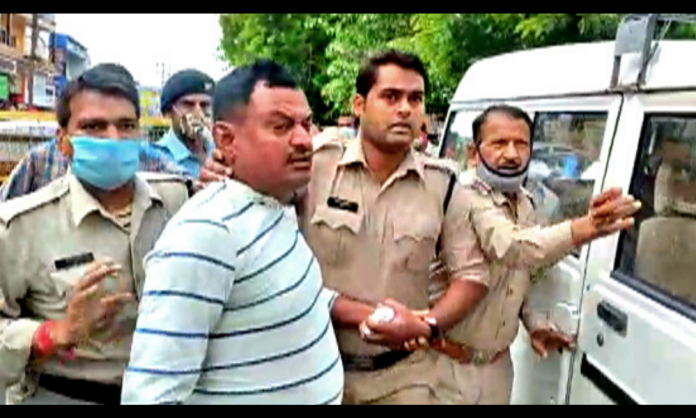 On the day of the arrest of dreaded gangster Vikas Dubey from the city of Ujjain in Madhya Pradesh, a video had emerged which had gone viral on the Internet in no time in which a police constable was seen slapping the criminal for his imperious demeanour.

The constable, Vijay Rathore, who was among the police officials who had arrested Dubey from the Mahakal temple in Ujjain, revealed how the arrested thug was still dishing out threats to the police when he was taken into from the city’s renowned Mahakal temple.

Describing the events that led the police constable to land a resounding slap on Dubey’s cheeks, Vijay said, “When we brought him to the police station, he was very angry. He said that if I were in Uttar Pradesh, I would have set your houses on fire. He threatened us that he would have gotten our hands and feet amputated. I was the one who handcuffed him, so he was particularly annoyed with me. When he was being taken to the car, he started abusing. I got angry, so I slapped him.”

According to the police officials who arrested Dubey, the gangster was constantly hurling abuses and issuing threats to the police personnel for committing the audacity of arresting him. While in the police station, Dubey proudly claimed that he was never handcuffed until that day. The fear among the MP police officials is so palpable that even after the encounter of Vikas Dubey, many of them are shying away from revealing details of his arrest.

Vikas Dubey was not alone in Ujjain: Constable Vijay

Meanwhile, constable Vijay is worried about his safety, claiming that he was the one who handcuffed the gangster and his photos and interviews have been widely published in the news media. Though Dubey is dead, constable Vijay fears that one of his associates or loyal underling may plan an attack against him or his family. He also revealed that Dubey was constantly referring to a man named Bittu, possibly his associate, who was with him while he was in Ujjain. Constable Vijay has asked senior officials to allow him to keep a weapon as a measure of safety against any untoward attack by Dubey loyalists.

Vikas Dubey arrested from Ujjain and slapped by a police official

The notorious gangster Vikas Dubey, who was responsible for the death of 8 policemen in Kanpur was arrested from Ujjain’s Mahakal temple on Thursday.

Vikas Dubey, dressed in a white shirt with a mask, was then brought to the Mahakal police station. The police had reportedly found credible identity proof with him after the arrest proving that the man arrested is Vikas Dubey.

A video of the gangster being slapped had gone viral on the social media platforms. The video showed the gangster shouting “Main Vikas Dubey hoon Kanpur wala” (I am Vikas Dubey from Kanpur). A police officer is then seen giving a strong slap to the gangster, asking him to keep silent and sit in the car.

Dubey was, however, killed in an encounter by the Uttar Pradesh police after he tried to snatch the weapon of a police officer and attempted to flee while he was being transported from Ujjain to Kanpur.