Husband was watching the film with his girlfriend, wife reached the cinema hall and then what happened next - THN News 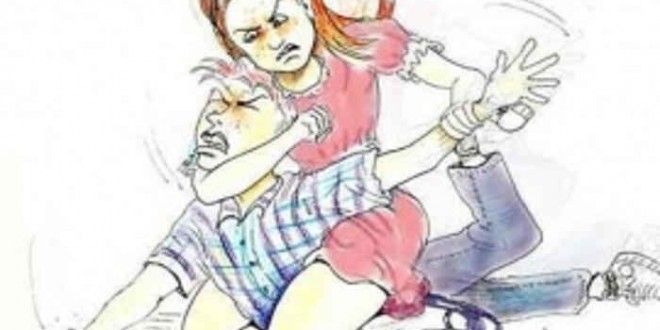 Every wife wants her husband to be loyal to her. In such a situation, when Husband walks with the girl without his knowledge, his anger reaches the sky in the seventh. Something similar happened in the Indore city of Madhya Pradesh. Here a merid youth living in Nandanagar came to see the film in Velocity Cinema Hall of Khajrana area with his colleague woman and alleged girlfriend. These two were watching a film called ‘Sand ki Aankh’. On the other hand, the wife of the married man got a clue about this. In such a situation, she reached the same cinema hall with her sister. Now as soon as the husband came out of the theater with his girlfriend, his wife and sister-in-law caught hold. The two sisters together fiercely washed the young woman’s partner.

When the husband came to save her in the middle, wife and sister-in-law beat him up as well. The people present there were surprised to see this scene. Some people also in between. But the angry red wife did not take the name of the stay. He beat up the girl the most. The security present in the cinema hall also came to the rescue, but in front of the anger of wife and sister-in-law, they could not do it either. Finally, the police were called. When the police came to the scene, the matter went quiet. Police took the married young man, his girlfriend and wife trio with them to the police station. The woman lodged a complaint against her husband and her co-worker. Police are currently investigating the case. According to the information, his argument continued inside the police station for a long time.

This whole matter is of Sunday afternoon. When this great war was going on, the people there started making videos on mobile. What was it then? Now, this video has become very viral on social media. People started giving their different opinions on this matter. Many people also said that the woman had to beat her husband, he should not have killed the woman. By the way, the woman’s husband with whom the girl went to see the film, was she really a girlfriend or just a colleague, this is not clear yet. But looking at the woman’s anger, it seems that the matter was more than friendship. Well, you can watch this viral video here.

By the way, do you think the woman has beaten her husband’s girlfriend right or wrong? Should he have killed his girlfriend more than Husband? Please give us your answers in the comment section. By the way, we would also advise you, people, not to cheat your spouse in this way. Otherwise, it can have similar results. Often people do such things by keeping their life partner in the dark which is completely wrong. If you are not happy with your partner, then divorce him first and then do such actions.