A screengrab of a broadcast by India TV aired on May 31 has been shared by several social media users.

A bottom ticket on the screen also stated the Prime Minister as saying, “Ayushman Bharat has benefitted the poor people of this country.”

Based on the graphic, many individuals have mocked the PM stating that India has less than 2 lakh COVID-19 cases. while the total number of cases in the world is 62 lakh. Below is a tweet by lawyer Dushyant (@atti_cus) which garnered 8,600 likes and 3,500 retweets as of this writing.

But India has less than 2L.

Whole world has only 62L as on date.

The screengrab was also tweeted by Amina (@LuvAminaKausar) who describes herself as an American but Indian by heart.

Modi claims 1 crore corona patients have been treated for free but India has less than 2 Lakh cases.

Whole world has ~62L positives as of today.

Who the hell has he been treating? 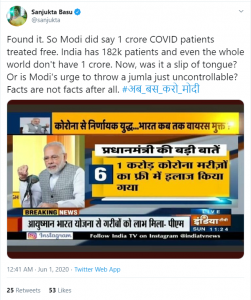 The graphic was part of India TV’s broadcast aired in the morning of May 31 where PM Modi’s radio show ‘Mann ki Baat’ was played live. However, on June 1, India TV aired a correction. “Yesterday during the broadcast of Mann Ki Baat, it was reported that one crore patients of corona have been treated in India. This was a human mistake. Let us make it clear that the number of corona patients in India is not so high. We are sorry for this mistake.”

India TV’s broadcast concerned PM Modi’s ‘Mann ki Baat’ address on May 30 where he spoke about the coronavirus pandemic and the Ayushman Bharat health scheme which he said has helped the poor.
He can be heard talking about the same 18 minutes onward in the show. The Prime Minister stated that the beneficiaries of Ayushman Bharat scheme have crossed the figure of 1 crore.
This was misreported by India TV as him claiming that 1 crore COVID-19 patients have been treated for free.
Therefore, an erroneous video report by India TV led many social media users to target PM Modi. However, India TV later clarified that the channel made a mistake.