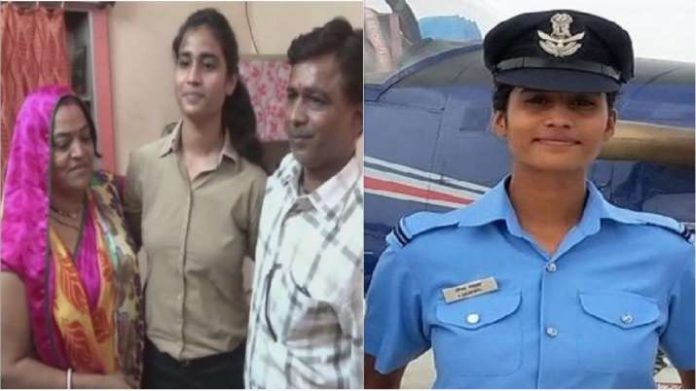 Women are destined to achieve great things in life. There is literally nothing in this world that can stop them from touching the pinnacle of success. Just like men, women too are going places with relative ease in this competitive world.

Aanchal Gangwal, the daughter of a tea seller from a small district in Madhya Pradesh became an inspiration for many girls as she has become a flying officer of the Indian Air force.

Coming from an economically backward section of the society, tea seller’s daughter Aanchal always dreamt of doing something extraordinary since her childhood stage. Despite her financial crisis, Gangwal became the only candidate to clear administrative test in Madhya Pradesh.

Her father Suresh Gangwal owns a small tea stall at Neemuch district of Madhya Pradesh. Aanchal has been inducted into the Indian Air force after her initial training. She was awarded the Plaque alongside 123 flight cadets who were commissioned as officers of the Indian Air Force (IAF).

Talking about what inspired her to pursue this dream, Aanchal told news agency ANI, “When I was in Class 12, I was inspired with Armed Forces’ rescue operations during Uttarakhand flood. So I decided to join defence.”

Aanchal said, “When I was a school kid, I had decided to be in the defence. Today as I become an officer, it still feels surreal. It is a dream come true.”

She further said, “I used to dream of this day almost every night. To stand in my uniform, in front of my father and mother, who have fought all the difficulties in their lives to get me here. However, due to Covid-19 that could not happen. But I am happy that they could see the ceremony on television.”

“When I told my parents that I want to be in defence, they were a little worried like any parent. But they never tried to stop me. In fact, they have always been the pillars of my life.” she added.

It’s a dream come true and it’s also a great responsibility. Fulfilling her dream, she has made India very proud. Now, many girls would like to join the Indian Air Force after seeing her as a pilot. Her induction would create many opportunities for girls.

It is a big achievement for somebody from an economically backward family. It is a matter of pride for many young girls who aspire to become a pilot in theIndian Air Force. Her success will inspire other girls.

Taking to Twitter, CM wrote, “It takes a lot of perseverance & determination to tread a new path. MP’s daughter Aanchal Gangwal from Neemuch has proved this with her achievement. She is one among the 6 lakh applicants who vied for 22 posts of flying branch of @IAF_MCC & made it successfully. Congratulations!”

It takes a lot of perseverance & determination to tread a new path. MP's daughter Aanchal Gangwal from Neemuch has proved this with her achievement. She is one among the 6 lakh applicants who vied for 22 posts of flying branch of @IAF_MCC & made it successfully. Congratulations! pic.twitter.com/89XPaayUVe