The Rashtriya Swayamsevak Sangh (RSS) has stepped in to help local communities and administration to put up a strong fight against the deadly Wuhan coronavirus pandemic. In a video that has now surfaced on Twitter, RSS workers are seen cleaning hospital beds and brooming floors in a bid to help the hospital authorities.

The organisation is focused on the poor and marginalised who lack awareness about the COVID-19 and ways to prevent it. As such, soaps, sanitizers and protective masks were distributed among the masses. Preventive measures were also discussed during the interaction between Swayamsevaks and the local people.

In Odisha and Karnataka, RSS Swayamsevaks have distributed masks and have conducted awareness drives. In Madhya Pradesh, they have sanitised an entire village while in Kerala, Swayamsevaks and Seva Bharti volunteers have been assisting police and fire services in cleaning and disinfection works.

Senior functionaries have revealed that around 70,000 daily shakhas of RSS and its affiliate organisations have been asked to prioritise the fight against COVID-19. Meanwhile, the top brass of the organisation is closely monitoring the situation on the ground. 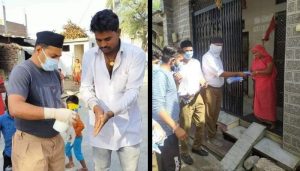 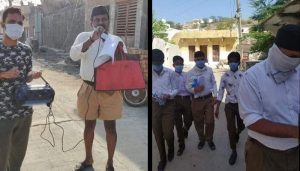 On Thursday, the RSS had lauded Prime Minister Narendra Modi’s appeal to contain the transmission of the deadly pathogen through Janata Curfew, a means of social distancing. RSS general secretary Bhaiyyaji Joshi said that the foot soldiers of RSS and their families must make efforts to raise awareness and contribute to the endeavours of the Central and State Governments.

A Delhi unit official of Sewa Bharati was quoted as saying, In Delhi, we have a presence in more than 300 slums. Our volunteers are helping people around by distributing food packets, masks and soaps. While doing this we are ensuring that there is no crowding.”

“Whenever there has been a natural calamity or a disaster, the RSS’ volunteers have always been on the forefront to help society deal with it. We are carrying forward this tradition though this time it appears to be the biggest-ever challenge we have faced as a society”, a functionary said on the condition of anonymity. Earlier today, Prime Minister Narendra Modi announced that he would address the people of India about the coronavirus pandemic at 8 p.m.