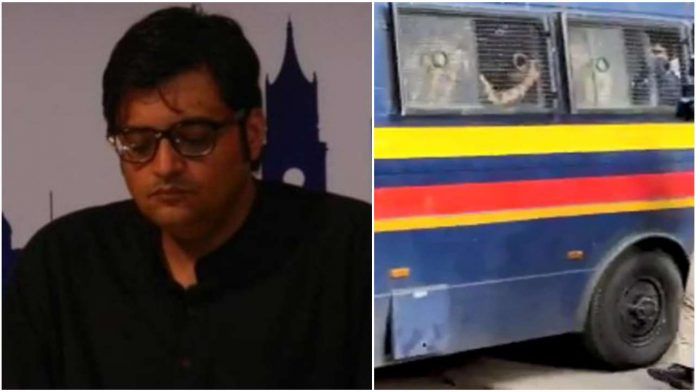 In shocking news, Republic Media Network’s Editor-in-Chief Arnab Goswami has been arrested by Maharashtra Police in connection with a 2018 suicide case. In 2018, an architect and his mother committed suicide over alleged non-payment of dues by Goswami’s Republic TV, a police official said.

The shocking news of Goswami’s arrest has sparked outrage among people in the country. People from all over the country have come out in support of Arnab Goswami.

His arrest has divided the media bodies. Hindi news channel Aaj Tak has strongly condemned the arrest of Arnab Goswami. While many Indian journalists came out in support of Arnab Goswami, others refused to condemn Arnab Goswami’s arrest. Aaj Tak says that we know “no one is above the law,” but no one has been given the power to snatch one’s freedom of expression.

Calling the incident a “misuse of state power,” Aaj Tak demanded a fair investigation into the case. The BJP also came out in strong support of Arnab Goswami, led by Union ministers Smriti Irani and Prakash Javadekar, with #IndiaWithArnab trending on Twitter.

Adnya Naik, Anvay’s daughter, told The Indian Express on Wednesday, “Goswami has been doing shows about the suicide of Sushant Singh Rajput and aggressively seeking arrests even though no suicide note was left behind. In the case of my father and grandmother, they left behind a suicide note specifically naming Goswami and two others but no action was taken against them for nearly two years.”

Anvay was the managing director of Mumbai-based architectural and interior designing firm Concorde Designs, his mother Kumud, who was also found dead in the bungalow along with him, was on the board of directors of the firm.

In a suicide note left behind by Anvay, he had said that he and his mother were taking the drastic step on account of payments due to them from three persons — Goswami of Republic TV, Feroz Shaikh of IcastX/Skimedia and Niteish Sarda of Smartworks. All three were arrested on Wednesday.

Renowned Indian Journalist, Arnab Goswami is known as a fearless speaker. Social media users too have extended their support to the editor and #WesupportArnabGoswami began trending on Twitter.

The News Broadcasters Association (NBA) on Wednesday strongly condemned the arrest of Arnab Goswami. “NBA is dismayed in the manner in which he was arrested. Even though NBA does not agree with his type of journalism, we denounce retaliatory action, if any by the authorities against a media editor. Media is not above the law but due process must be followed,” it said in a statement.