1 hour before her death, Sushma said to Harish Salve, 'Come get your 1 rupee fee' - THN News 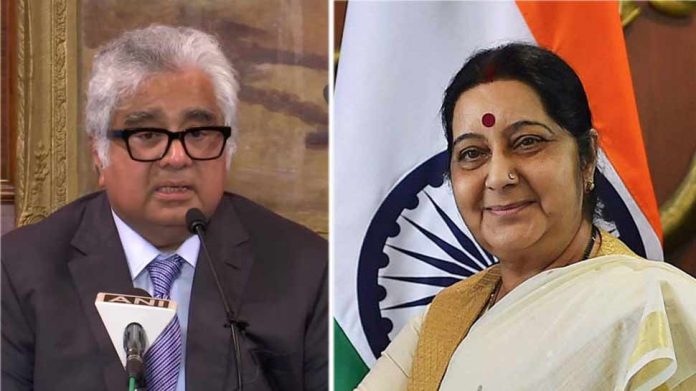 India’s former foreign minister Sushma Swaraj is no more. She was admitted to AIIMS in New Delhi after suffering a heart attack, where she breathed her last. Hours before her death, she congratulated Prime Minister Narendra Modi on Twitter for the major change in Jammu and Kashmir. But just an hour before her demise, she had a conversation with veteran lawyer Harish who was representing India in the Kulbhushan Jadhav case in the International Court of Justice. In which he asked Salve to come to India and take his ‘1 rupee’ fee. Salve advocated on behalf of India during the hearing of the Jadhav case in the International Court of Justice (ICJ) in The Hague.
After the death of Sushma Swaraj, Harish Salve revealed this in a conversation with an English channel. Harish Salve said that he spoke to him at around 8:50 pm, about an hour before his death. It was a very emotional conversation. They said, come and meet me. I have to give you one rupee for the case you won. I said that of course, I have to come to take that precious fee. He said come at 6 o’clock tomorrow. ‘ But Swaraj Salve could not pay this one rupee fee and stayed forever.

Harish Salve fought the case for just 1 rupee
Kulbhushan Jadhav, who is imprisoned in Pakistan and sentenced to death, Harish Salve has fought the case in the International Court of Justice, in which India has won. Salve has charged a fee of 1 rupee for this case. Let us tell you that Jadhav was arrested by Pakistan in March 2016 on charges of espionage. India raised the case in the ICJ after a military court sentenced Jadhav to death. In its decision only last month, the ICJ directed Pakistan to uphold Jadhav’s death sentence and give him diplomatic access. India had asked Pakistan to take immediate action on the ICJ order and give Jadhav consular access.

Sushma expressed happiness over winning the case
Sushma Swaraj tweeted on India’s victory in the Kulbhushan Jadhav case. He wrote that in the Jadhav case, I wholeheartedly welcome the decision of the International Court of Justice. This is a great victory for India. He also thanked lawyer Harish Salve for fighting the case effectively in the International Court of Justice.