Prithviraj Chauhan was born at Ajaymeru (Ajmer) in 1166 A.D. His father was Someshwar Chauhan and mother Karpuri Devi, a Kalachuri (Chedi) princess, daughter of Achalaraja of Tripuri.

Muhammad Ghori attacked India multiple times. First time he was routed in present day Gujarat by Rajputs. Mularaja-II was not even a teen yet and his mother organized the defences of Pattan. Battle was fought at Kayadara near Mount Abu, in 1178 A.D. and Ghori was resoundingly defeated. After this defeat he never entered India through Gujarat. In first battle of Taraori in 1191 Prithviraj Chauhan’s cavalry charged and routed the Ghurid cavalry and captured Ghori. Ghori begged for his life. Prithviraj allowed him to go despite his generals asking him not to do so.

Prithviraj Chauhan lived at Taragarh fort which was also known as Ajaymeru after which the town of Ajmer got its name.

Following year Ghori came again. Prithviraj advanced with his army and sent a letter to Ghori. In this letter Ghori was asked to return as he had been defeated the previous year and was spared his life. Ghori replied that he was in India on the orders of his brother, Ghiasuddin, and that he could only retreat after he got a word from his brother. This letter was sent in the evening and after sending the letter Ghori moved his camp back a few kilometers to feign retreat. On receiving this letter and seeing Muhammad move his camp back Prithviraj assumed that Ghori was not interested in fighting. Ghori also knew that rajputs did not fight in the night and only started fighting after sun had come up. (This is an ancient Kshatriya practice e.g Mahabharata was also fought mostly in day time). Ghori treacherously attacked in the early morning hours when Prithviraj and his army were sleeping and was able to win this war

The founder of the Gahadwala line was Govindchandra Gahadwala. He was an astute ruler and ruled from Kannauj. Most of North India, including the university town of Nalanda was a part of his kingdom. He stoutly defended his kingdom from further Muslims incursions. He instituted a tax for this purpose which was called Turushka Danda (i.e. tax to fight the Turushkas or Turks). His grandson was Jaichandra Gahadwala (Rathod) who played a tragic role in Indian History.

The Story of Prithviraj Chouhan and Mahmud Ghori

In Jaichand’s days, a rival Rajput clan had established itself in Delhi (Pithoragarh). The ruler there was Prithviraj Chouhan. Pritiviraj was a romantic, chivalrous and an extremely fearless person. After ceaseless military campaigns, Pritiviraj extended his original kingdom of Sambhar (Shakambara) to Rajasthan, Gujarat, and Eastern Punjab. He ruled from his twin capitals at Delhi and Ajmer. His fast rise caught the envy of the then powerful ruler Jaichandra Gahadwala and there was a lot of ill-feeling between the two.

The story of Prithviraj’s bold exploits spread far and wide in the country and he was the center of much discussion in the circle of the nobility. Sanyogita, the daughter of Jaichandra Gahadwala fell secretly in love with Prithiviraj and she started a secret poetic correspondence with him. Her father the haughty Jaichandra got wind of this and he decided to teach his daughter and her upstart lover a lesson. So he arranged a Swayamwara (a ceremony where a bride can select her husband from the assembled princes. She had the right to garland any prince and she became his queen. This is an ancient Hindu custom among Royalty). Jaichandra invited all the big and small princes of the country to Kannauj for the royal Swayamwara. But he deliberately ignored Prithiviraj.

To add insult to injury, he even made a statue of Prithiviraj and kept him as a dwarpala (doorman).

The Elopement of Sanyogita with Prithviraj

Prithviraj got to know of this and he confided his plans to his lover.
On the said day, Sanyogita walked down the aisle where the royals had assembled and bypassed all of them only to reach the door and garland the statue of Pritiviraj as a doorman. The assemblage was stunned at this brash act of hers. But what stunned them and her father Jaichandra was the next thing that happened.

Prithiviraj who was hiding behind the statue, also in the garb of a doorman, whisked Sanyogita away and put her up on his steed to make a fast getaway to his capital at Delhi

Chouhan-Rathod Warfare Leads to Weakening of both Rajput Kingdoms

Jaichandra and his army gave earnest chase and in the resultant string of battles between the two kingdoms fought between 1189 and 1190, both of them sufferred heavily. While this drama was being enacted, another ruler also named Mahmud who was from Ghori in Afghanistan had grown powerful and had captured Ghazni and subsequently attacked the Ghaznavid Governor of Punjab and defeated him. The kingdom of Mahmud Ghori now stretched up to the domains of Prithiviraj Chouhan. A clash was inevitable

The 1st Battle of Tarain 1191 C.E. – Victory of Prithiviraj Chouhan

Mahmud Ghori threw the gauntlet by laying siege to the fortress of Bhatinda in East Punjab which was on the frontier of Prithiviraj’s domains. Prithviraj’s appeal for help from his father-in-law was scornfully rejected by the haughty Jaichandra. But undaunted Prithviraj marched on to Bhatinda and met his enemy at a place called Tarain (also called Taraori) near the ancient town of Thanesar. In face of the persistent Rajput attacks, the battle was won as the Muslim army broke ranks and fled leaving their general Mahmud Ghori as a prisoner in Pritiviraj’s hands.

Mahmud Ghori was brought in chains to Pithoragarh – Prithviraj’s capital and he begged his victor for mercy and release. Prithviraj’s ministers advised against pardoning the aggressor. But the chivalrous and valiant Prithviraj thought otherwise and respectfully released the vanquished Ghori.

The 2nd Battle of Tarain 1192 C.E. – Defeat of Prithiviraj Chouhan

The very next year Prithiviraj’s gesture was repaid by Ghori who re-attacked Prithiviraj with a stronger army and guilfully defeated him by attacking the Rajput army before daybreak. (The Hindus incidentally followed a hoary practice of battling only from sunrise up to sunset. Before Sunrise and after Sunset there was to be no fighting- as per a time honoured battle code).The defeated Prithiviraj was pursued up to his capital and in chains he was taken as a captive to Ghor in Afghanistan.

The Blinding of Prithviraj

The story of Prithiviraj does not end here. As a prisoner in Ghor he was presented before Mahmud, where he looked Ghori straight into the eye

Ghori ordered him to lower his eyes, whereupon a defiant Prithiviraj scornfully told him how he had treated Ghori as a prisoner and said that the eyelids of a Rajputs eyes are lowered only in death.On hearing this, Ghori flew into a rage and ordered that Prithviraj’s eyes be burnt with red hot iron rods

This heinous deed being done, Prithiviraj was regularly brought to the court to be taunted by Ghori and his courtiers. In those days Prithiviraj was joined by his former biographer Chand Bardai, who had composed a ballad-biography on Pritiviraj in the name of Prithviraj Raso (Songs of Prithviraj). Chand Bardai told Prithiviraj, that he should avenge Ghori’s betrayal and daily insults.

The Blind Prithviraj Avenges the Injustice done to him

The two got an opportunity when Ghori announced a game of Archery. On the advice of Chand Bardai, Prithviraj, who was then at court said he would also like to participate. On hearing his suggestion, the courtiers guffawed at him and he was taunted by Ghori as to how he could participate when he could not see. Whereupon, Prithiviraj told Mahmud Ghori to order him to shoot, and he would reach his target.

Ghori became suspicious and asked Prithviraj why he wanted Ghori himself to order and not anyone else. On behlaf of Prithiviraj, Chand Bardai told Ghori that he as a king would not accept orders from anyone other than a king. His ego satisfied, Mahmud Ghori agreed. 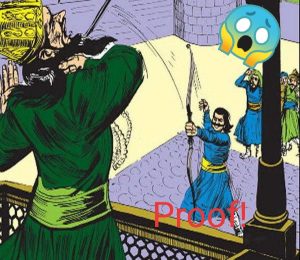 On the said day, Ghori sitting in his royal enclosure had Prithiviraj brought to the ground and had him unchained for the event. On Ghori’s ordering Prithviraj to shoot, we are told Prithiviraj turned in the direction from where he heard Ghori speak and struck Ghori dead with his arrow. This event is described by Chand Bardai in the couplet, “Dus kadam aggey, bees kadam daey, baitha hai Sultan. Ab mat chuko Chouhan, chala do apna baan.” (Ten feet ahead of you and twenty feet to your right, is seated the Sultan, do not now miss him Chouhan, release your baan – arrow).

Thus ended the story of the brave but unrealistic Prithviraj Chouhan – the last Hindu ruler of Delhi. Delhi was to remain under Muslim rule for the next 700 years till 1857 and under British rule till 1947. Those few Hindus who came close to liberating Delhi during the seven centuries of Muslim rule were Rana Sanga in 1527, Raja (Hemu) Vikramaditya in around 1565 (2nd battle of Panipat), and Shrimant Vishwas Rao who was the Peshwa’s son and was co-commander of the Maratha forces in the 3rd battle of Panipat in 1761. Metaphorically speaking, the next Hindu ruler to actually preside over Delhi was to be Dr. Rajendra Prasad, the first President of Independent India (and Jawarharlal Nehru – who was the President’s first Minister).