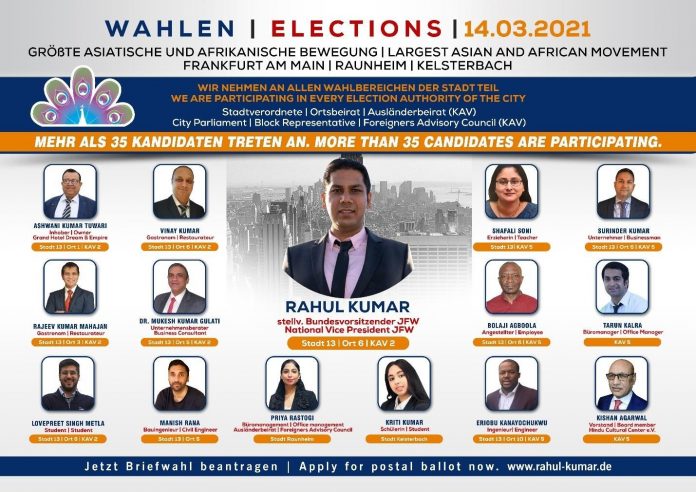 It is a very proud and historical moment for all the Indians living in the state of Hessen
in Germany as for the first time in the state political history, a large number of Indians are actively participating in the upcoming state elections on March 14th, 2021.

These elections are going to be held on 14th March 2021 and there are many Indian
candidates who are contesting for three different types of offices i.e. Foreign
Representative, Area Representative, and City Parliament.

There are around 30 candidates, of Indian origin who are proudly contesting in these
elections making it a historic moment for the community.

The top candidate from Frankfurt, Mr. Rahul Kumar is the inspiration and motivation
behind this movement. He has been successfully working as a Vice Mayor and Magistrate
Member, for the city of Kelsterbach in Hessen since 2010. His success has ingested self-belief in many fellow Indians. Rahul Kumar and his team have put in lot of efforts and with great enthusiasm not only created a team but also got selected as main contestants from different towns/cities across the Frankfurt region. The team also achieved to include for the first time “Hindi” and “Punjabi” languages in Frankfurt Government AAP (Guide).
https://frankfurt.de/aktuelle-meldung/meldungen/frauen-guide-app

The number of registered candidates were so high, that they needed to form two parties
with names FREIE WÄHLER and BHARAT. For all our fellow Indians it is a proud moment.
Their main motive is to serve humanity and help people, who are living abroad. The
election results will be announced one week after the day of the election. Candidates have a great hope to win from each city with the maximum number of votes. In addition, one
can easily see the enthusiasm the Indians have these days in Frankfurt and the cities
around it to support their representatives. All the candidates have worked really hard to
organize the whole election process, they have put in their best efforts into the required
verification and other processes. It took many years of preparation and the contestants
never failed to achieve their targets. The promotions were done via various mediums like
Social Media, Newspapers, Flyers, Posters, and a large number of video campaigns in
multiple languages.

People being more politically aware and exposed to technology has helped the process of
promotion despite the current pandemic. We wish for their success & despite of any
results we feel proud of our fellow Indians. They are gems of India and we are sure that
they will make India shine in Germany!

PM Trudeau: If the world manages to conquer Covid, it will be because of India

What impact will Joe Biden have on immigration from India?