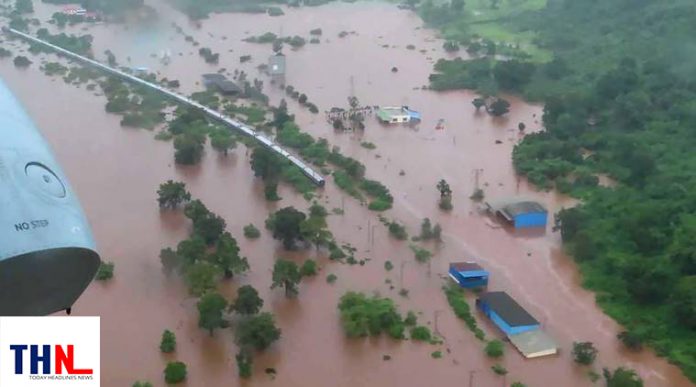 Due to heavy rains, Mumbai has once again become watery. With constant rain, water is flooded in many areas. The Meteorological Department has issued heavy warning on Saturday. Due to water filling on the track, 700 passengers stranded in Mahalaxmi Express have been evacuated. Travelers were stranded in the last 19 hours, about 55 kilometers away from Mumbai. 4 teams of NDRF removed passengers with the help of 8 boats.
https://twitter.com/indiannavy/status/1155025285953097728

At the same time, Home Minister Amit Shah has said that teams of NDRF, Navy, Indian Air Force, Railway and State Administration have secured all 700 passengers stranded in the Mahalaxmi Express. We were closely monitoring the entire operation. He congratulated the rescue teams.
A special train of 19 coaches will be sent to bring stranded passengers in Mahalaxmi Express. Trains will travel from Kalyan to Kolhapur along with the passengers of the Mahalaxmi Express. More than 30 doctors’ teams and ambulances have reached the spot. Apart from this, more than 10 buses have been set up to carry passengers. Chief Minister Devendra Fadnavis is keeping an eye on the situation.

CM Devendra Fadnavis has said that the Navy has 7 teams and two Air Force helicopters are present at the scene of the tragic death of Mahalaxmi Express. The situation is in control. Explain that CM Devendra Fadnavis has instructed the Chief Secretary to visit Wanjani and personally monitor rescue operations.
Around 9 hours to save the stranded passengers in Mahalaxmi Express, eight teams of Navy have been included, including the team of 3 divers. Teams have been dispatched with rescue materials, boats and life jackets. Before this, the team of Navy divers was sent on the spot to take stock of the situation with a helicopter. Please tell that the train is trapped between Badlapur and Vangani, about 55 kilometers from Mumbai.
https://twitter.com/ANI/status/1154992379977457664

Mahalaxmi Express is trapped between Badlapur and Vangini due to heavy rain and water filling on the track. There are about 700 passengers on the train. The rescue work continues. RPF and city police teams have been reached at the spot and biscuits and water are being distributed to stranded passengers.
https://twitter.com/ANI/status/1154973555857272835

Chief Public Relations Officer of Central Railway, requesting passengers stranded in Mahalaxmi Express, said that they should not get down from the train. The train is the safest place. Wait for the instructions of NDRF and other Disaster Management Authorities.
Due to heavy rains in Maharashtra traffic has been completely affected. According to Central Railway, 13 trains have been diverted, 6 have been stopped and two trains have been canceled. Due to the elevation of Ulhas river water level has increased in Ambernath. Due to heavy rains in Mumbai, 11 flights have been canceled on Saturday, along with the coming 9 planes have been diverted to nearby airports. In the canceled flights, 7 aircraft were flying from Mumbai airport, while 4 were going to land here. The canceled 7 flights are of Indigo and one each from Air India and Emirates. In addition to this, Indigo has also canceled its three other flights for Mumbai.

The possibility of heavy rains in Thane and Raigad, including the capital Mumbai. Prior to this, a red alert has been issued for Palghar on July 26 and 28. Explain that different alerts are issued from different ranges ranging from red to orange to different situations of monsoon. Among them are the Orange Alert officers to be ready to deal with the serious situation.
https://twitter.com/ANI/status/1154778379033423872

Meteorological Department has asked the people to be alert due to heavy rains. Because in such a situation the event of the collapse of old structures or house wall can not be denied. Tell us that in the state of the past due to a falling wall, many people were injured. Many people lost their lives in such an accident.