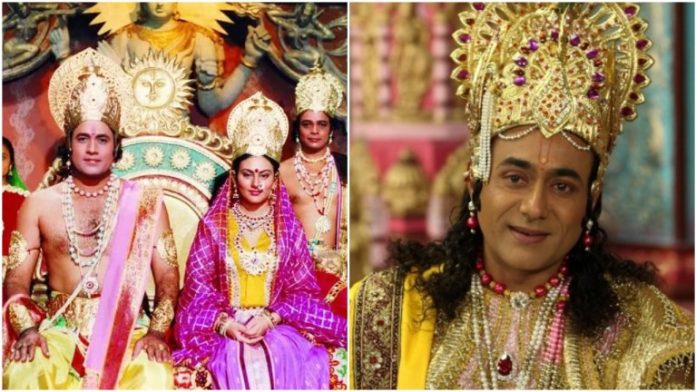 The ‘secular-liberal’ media having the dubious distinction of maligning Hindu festivals have now stepped up their fight towards demonizing Hindus and the customs and traditions they hold sacred. The Hinduphobic media organisations, which started with pushing Hinduphobic sentiments by bashing festivals of Hindu festivals while gushing over the festivals of other religions, have now even begun to target the routine practises followed by the indigenous faith of the country.

At first, they started with maligning Hindu festivals while glossing over the uncomfortable truths about the festivals of other religions. The fake news website ‘The Quint’ had once proceeded to brand the Holi festival as an occasion used by kids to unleash terror on the streets. Another notorious media outlet, Scroll. known for its anti-Hindu inclinations had resorted to publishing a post sending those celebrating the festival of Holi on a guilt trip by pointing out the terrible water crisis gripping the country. 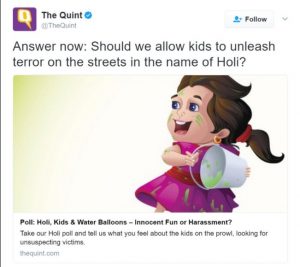 Perhaps the most offensive theories to vilify Holi was from the ultra-left wing rag – The Wire, which had come up with the semen filled balloons theory and carried a post that said, “The festival of Holi perpetuates rape culture”.

Even, Deepavali – the festival of lights came under the scrutiny of the ‘liberal-secular’ media, who wasted no time to indulge in their usual antics of bashing it by associating it with a false sense of being the source of pollution. The champions of secularism have made a common point against celebrating Deepavali by accusing Hindus of causing pollution and serious harm to health of kids and adults alike by bursting crackers.

Addition to that, the ecosystem often reminds us how animals feel threatened and disturbed by loud noises during Deepavali. On Diwali, the Quint published an article claiming that firecrackers should be done away with as there’s nothing religious about them. The Wire known for its anti-Hindu inclinations fretted over pollution caused by bursting of crackers that accompany the Hindu festival of Diwali. 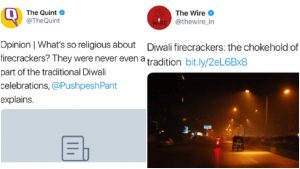 Continuing its trend to pontificate Hindus over their religious practises and customs, on Thursday, Times of India published a story claiming at least 12 children from Hyderabad and surrounding areas have lost eyesight in one eye in the past 40-odd days since the coronavirus lockdown began and the report blamed the popular ‘Mahabharata’ and ‘Ramayana’ serials being rerun on TV.

According to the ToI report, many children have started playing with homemade bows and arrows fashioned mostly out of broomsticks. This has resulted in injuries to kids, forcing parents to rush their kids with pierced eyes to the nearest hospital. “When Ramayana was telecast about two decades back, we saw many bow-and-arrow injuries,” said Dr Subhadra Jalali, director of a Retina Institute in Hyderabad.

The bizarre conclusion that kids are being inspired by Ramayana and Mahabharata to injure other kids by making homemade arms is nothing but another step to push Hindus on a guilt trip for watching the mythological teleserial of Ramayana and Mahabharata. Incidentally, Ramayana and Mahabharata, which is now the most-watched TV shows across the world, is the epitome of moral values and ethics. At a time when the entire nation has been thrilled to watch the Hindu epics on TV, the anti-Hindu propaganda stems out unsurprisingly to put the blame on Hindus for expressing their adulation towards the magnificent Hindu religious epics.

Liberals-Seculars turn blind eye to vices of other religion

The liberals and seculars have always found a way to malign Hindu customs, festivals while ignoring over the uncomfortable truths about the festivals of other religions. The modus operandi espoused by such media outlets entails pontificating Hindus about the vices purportedly associated with their festivals and holding the festivals responsible for the perpetuation of those vices.

However, these moral lectures are exclusive only for the Hindu festivals and for non-Hindu festivals, lofty ideals of brotherhood, peace, inclusiveness etc. are attached while glaring vices are intentionally concealed.

A trend has now emerged in which these so-called ‘secular’ media outfits tries to show the Hindu way and things they hold sacred in a bad light while conveniently ignoring the transgressions caused by celebrations of festivals of other religions. A concerted attempt is being made to make Hindus feel guilty about their way of life so that instead of taking pride in their cultural mores, Hindus feel ashamed of continuing with them.